Ocon: I cried when I crossed the line and proud to say it 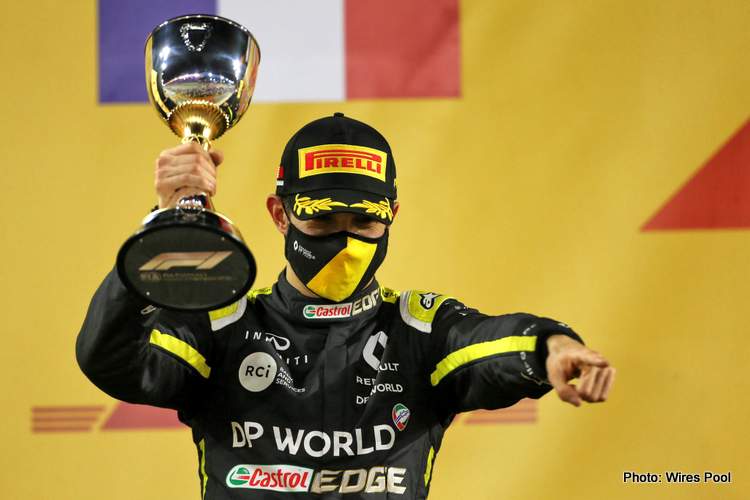 Renault driver Esteban Ocon admits he was in tears as he crossed the line to finish second at the 2020 Sakhir Grand Prix and with it scoring his first podium in the top flight.

It was a much-needed strong result for the Frenchman who has the unenviable task of being teammate to highly-rated Daniel Ricciardo against whom he has been measured and far too often falling short. However, not on this night.

In an attrition packed race, Esteban and his crew played all the right cards and was clearly emotional when he alighted the cockpit of his car.

He said, “I have no words. I cried on the line, that’s how much emotion is going through my mind actually now. It’s been a tough season on our side. It hasn’t paid off all the time but we never stopped pushing.

“We kept working hard, we kept staying motivated. That was very important. At the moment where less and less people are believing in you, it’s important to believe in yourself and today we made it happen and I’m very pleased with it. It’s hard work but it has paid off.”

He acknowledged the Ricciardo-factor, “Daniel is a fantastic benchmark. He has done a fantastic season in his second season with Renault. He has stepped up. Overall, I feel like my progression has been strong as well. I am closing the gap to him and to have that podium is the cherry, the fruit on the cake.”

The Australian, who finished fifth on Sunday, graciously praised his teammate after the race, “It’s an amazing result for the team and congratulations to Esteban for getting his first-ever podium, it was a really strong race by him and his side of the garage.”

Later in the team report, Esteban added, “What a race! We made it, we’re on the podium and it’s a fantastic feeling. It was awesome and all the emotions left my body when I crossed the line. I definitely cried and I’m proud to say it.

“That moment, crossing the line, I’ll remember it forever. The team executed the race really well, we had strong pace, and I had some fun out there with some overtakes too. It’s been a tough season but we kept believing in ourselves and that’s rewarded with this amazing feeling.

“Keep believing and it will come at some point! We’ve progressed massively this year and next week it’s back to it to focus on ending the season as best as we can,” added Ocon.

Team boss Cyril Abiteboul was chuffed with his driver, “If a result like today is a team effort, it’s clearly one for Esteban. I am very, very happy for him that he can also experience for himself the good vibes that we’ve been having since the summer shutdown when the team’s progression has accelerated.

“We’ve had two podiums with Daniel and this time round it was with Esteban and we are all very grateful for that. His weekend was strong, the only challenging moment was in Q2 when we failed to progress into Q3.

“But that actually may have helped with the free starting tyre choice. From that point onwards, he drove a very strong race, managing to preserve the tyres at the start, be aggressive when it mattered and defending very well at the end against faster cars,” added Abiteboul.

Next year Esteban will team up with F1 legend Fernando Alonso at Alpine (aka Renault) as Daniel departs for McLaren. The Spaniard watching proceedings intently from the Renault pit garage will have been happy with what he saw on the night.