Bottas: If you don’t know F1, then I’d have looked like a complete fool 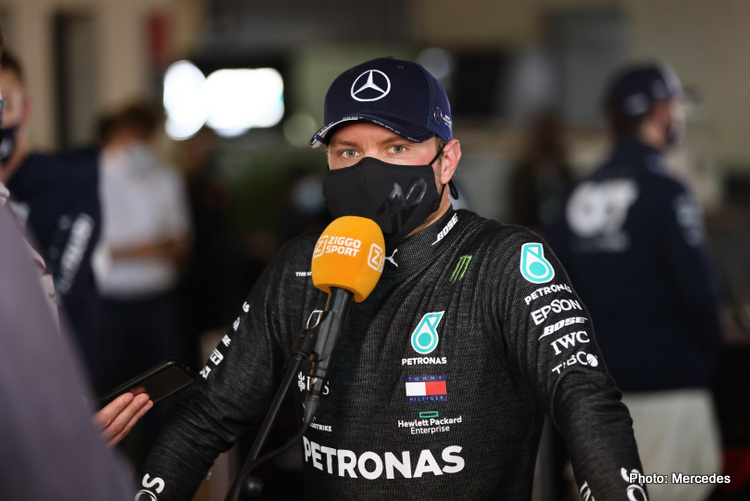 Mercedes driver Valtteri Bottas believes that he was catching George Russell at a “pretty decent rate” during his second stint at the Sakhir Grand Prix.

Russell had jumped the pole-sitter at the start and led the race for the whole of the first stint, before extending his lead to around eight seconds during the pit stop phase.

The Finn decided to run four laps longer in an attempt to create a tyre offset, but the safety car being deployed led to both Mercedes cars being called into the pits for a second time.

A mix-up during the stop caused both drivers to drop down the field and Bottas finished the Grand Prix in eighth.

Speaking after the race, the 31-year-old said that while he did not have track position, he believes that the strategy would have played into his hands had the safety not come out.

“I knew that in the first stint with the medium tyre, the track position would be important, so obviously was unfortunate to lose that,” Bottas said.

“But in the second stint, I was catching him at a pretty decent rate, so I knew everything is going to be open and most likely we’ll have a good battle.

“I still knew that everything was going to be to play for, especially towards the end of the stint on the hard tyres.”

The second-place driver in the world championship admitted that trailing Russell for much of the race did not look good from the outside.

“In the race, I just tried to make the most out of it, and I knew that it’s going to be a long race ahead, so I don’t think about those kind of things,” Bottas said.

“But now thinking about it, for sure, if you don’t know things, then I’d have looked like a complete c**t and a fool. So that’s not nice. It was a pretty bad race for me from that side, and it will be very easy for people to say a new guy comes in and beats the guy who’s been in the team for a few years. So it is not ideal.

“But the people who know, they know how is the performance, and they know how the end result could have been. I don’t know what to say really. Not ideal, obviously, this weekend.”