Verstappen: Why Leclerc dives up the inside like that? 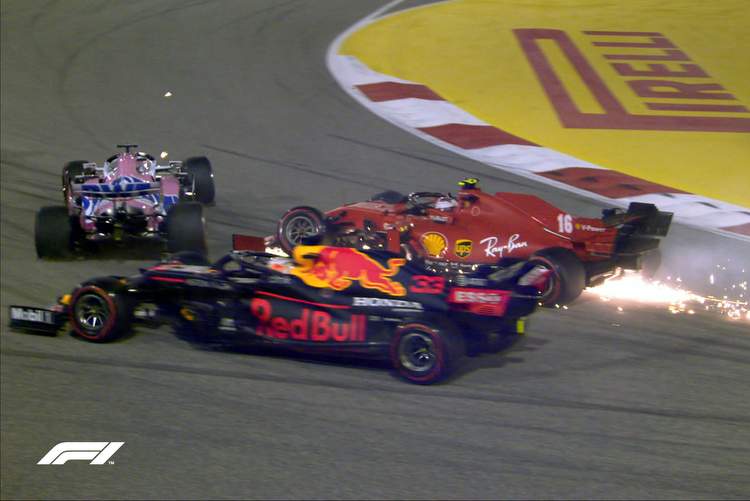 Max Verstappen was aggrieved after being forced off-track and crashing out of the 2020 Sakhir Grand Prix, after a brain-fade moment by Charles Leclerc on the opening lap of the race on Sunday night under floodlights.

In a sim racing move, Charles was over-ambitious, braked too late, missed the apex by a mile and clattered into the rear of Sergio Perez’s Racing Point, forcing Max driver to take evading action and crashing into the barrier, destroying the front-end of his car with the #16 Ferrari ending up beside him, both were out.

Leclerc’s clumsiness, turned to agony for the Red Bull driver and his legion of fans, as he would have been the pick of many to win the race before it started.

Max reflected afterwards, “The start wasn’t bad, but of course, Valtteri squeezed, which is normal, so I had to back out. From there onwards, it was all about surviving in-between the cars.

“I don’t know why they were being so aggressive and so reckless. We are all up in the front, and at the end of the day now, three cars basically were the victim of that, two cars heavily.

“I don’t really know why, especially Charles in Turn 4, why he dives up the inside like that,? Especially to brake that late as well. What do you expect? Checo cannot see what is happening on the inside, and he basically just locked his wheel and understeered into him.

“When Checo was spinning backwards, I tried to go around the outside, tried not to damage my car, but there’s nothing you can do there,” explained Max.

he added in the team report, I respect Charles a lot and he is a great driver but I think that was a bit too much. Checo couldn’t see what was happening on the inside, Charles hit him and then he was spinning backwards across the track.

“I tried to go around the outside to avoid any damage to my car but ended up in the gravel and then the barrier. It’s frustrating to retire so soon in a race where we had a racy car and a good chance of doing well.”

Later, when the Dutch driver was told that Leclerc had accepted the blame, he said: “As he should.”

In a stunning turn of events, Perez – who was involved in the skirmish – recovered to the pits for some minor repair work and tyre change.

Thereafter he drove the race of his life, from last to win the Grand Prix on the night while Max watched on wondering what might have been.