Verstappen: Close but not quite close enough 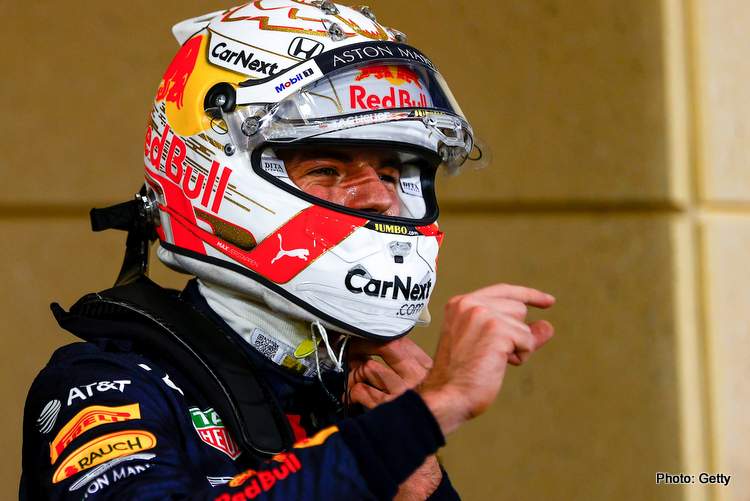 Even without Lewis Hamilton, Mercedes locked out the front row of the grid for the 2020 Sakhir Grand Prix, with Red Bull’s Max Verstappen – Mr P3 – running them close and setting the stage for a duel against Mercedes in the race on Sunday.

Although he was ‘doomed’ to third it was by the tiniest of margins, 0.056s to be precise, so there is nothing in it between the top three.

After an enthralling qualy session in Bahrain, the Dutchman said in the team report, “Close but not quite close enough. We can be happy about qualifying, and although we always want more, for us to be P3 on a track like this is pretty good.

“The gap is very close and it is a bit of a shame to miss out by so little. On such a short lap it was always going to be very tight but I think I got the most out of the lap. For sure both of the Mercedes cars will be quick tomorrow.

“George is a good driver so we need to take care of both cars to try and win. We are starting on a different tyre to them so it will be interesting to see how it’s going to play out and the start will be very important.

“Like I’ve said before, we’ve got nothing to lose so it’s better to have a bit of fun tomorrow and see what we can do. I’m looking forward to it,” added Max who will be looking Silverstone victory on Sunday night.

His boss Christian Horner added, “We knew it would be very tight in qualifying and I think Max got everything out of the car.

“It’s still third nonetheless and starting from the second row on the clean side of the grid is not a bad place to be. Max also starts on a different tyre compared to both Mercedes and hopefully a different strategy for tomorrow will provide opportunities in the race.”

In stark contrast teammate, Alex Albon was slowest of the Honda quartet, tellingly both AlphaTauri drivers are ahead of him on the grid. He will start from 12th.

Alex reported, “I’m surprised with today’s qualifying because after FP3 I was happy with the car and it felt like we were on for a good result so to come 12th is frustrating and we need to understand where it went wrong.

“We decided to only run the medium tyre in practice today to save the softs for qualifying and the car just felt very different between the two sessions so maybe that hurt us.”

Horner was sympathetic to his driver’s plight, and said in his defence, “It’s frustrating not to have Alex in Q3 and the small margins around such a short circuit mean that the smallest mistake can cost you a lot.

“The Team will help him understand what happened today and I’m sure he will be looking to make good progress through the field tomorrow. With overtaking possible, we aim for both cars to have a strong race,” concluded Horner.