Bottas: This wasn’t my best qualifying 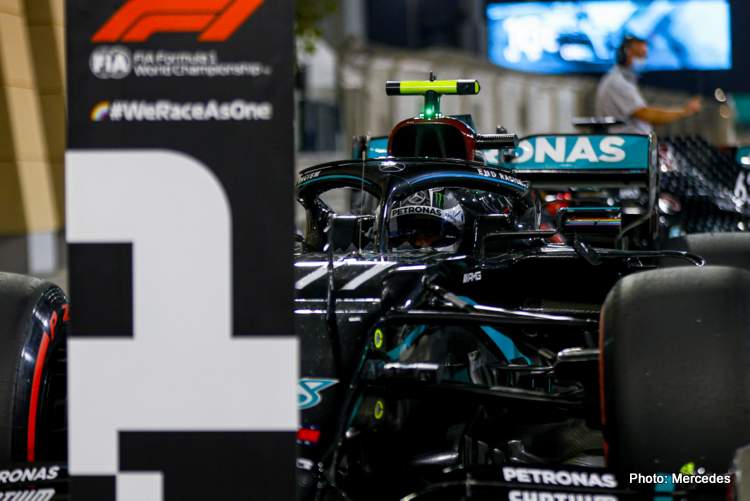 It might have not been his best qualifying, but it was enough to keep his pride held high when Valtteri Bottas did what he HAD to do on the night, namely prevent his new teammate from beating him to pole position in qualifying for the 2020 Sakhir Grand Prix.

Lewis Hamilton’s Covid-19 misfortune was George’s golden ticket to drive the most coveted race car on the planet, fresh from powering its regular occupant to a world title to add to his other six.

Expectations were high for George going into qualy – the fairytale of the new guy beating the regular guy too enchanting for media to allow to slip by – with Valtteri very much in the spotlight as he faced off to a driver that is sure to have a sparkling F1 career in years to come.

After a forgettable Friday, Valtteri ramped up his efforts in FP3 and then in qualifying did just enough to claim his 16th top spot start.

He reported after qualifying at Bahrain International Circuit, “It’s great to be on pole, I’m happy with that, but this wasn’t my best qualifying.

“My second run in Q3 was decent, but I think there was still a bit of time missing in Turn 7 and 8. I was the first car out on track on the final run, so I didn’t have a tow and ultimately couldn’t improve. It was fairly close in the end, so I’m pleased it was enough for pole position.

“It’s great to see George in P2 and that we managed to lock out the front row for the team. I’m not really surprised to see him up there, he kept improving throughout the weekend and particularly through qualifying.

“We’re starting on the Medium tyre tomorrow, which should put us in a good position in terms of strategy. Max is going to have an advantage for the race start itself with the softer tyre, but we think for the race overall we’re on the better tyre.

“The track is quite bumpy and it’s actually fairly easy to follow other cars thanks to the tow, but we’re in the best possible position for tomorrow and are looking forward to a fun race,” added Bottas who will be looking to make it 10 F1 wins on Sunday night, with beating his teammate a high-priority.

Team boss Toto Wolff was happy, Toto Wolff: “Scoring a front-row lockout in such a close qualifying session is a fantastic result for the team. This circuit is so short and with lap times below one minute, it was always going to produce very tight gaps and we saw that with less than a tenth between P1 and P3.

“I’m really happy with the result, Valtteri put in a good lap in Q3, which was enough for him to take pole position.”