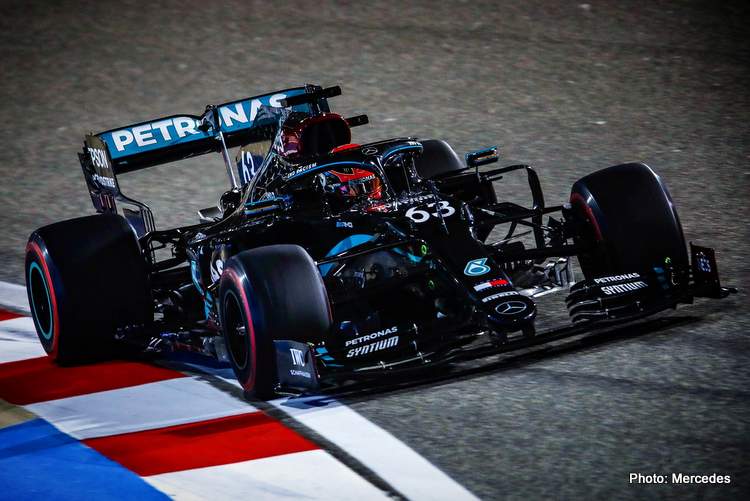 George Russell has the Formula 1 world buzzing after owning day one of the 2020 Sakhir Grand Prix weekend, topping the timesheets in both sessions and comprehensively outperforming teammate and Mercedes regular Valtteri Bottas.

Not long after receiving a 2am phone call from Mercedes chief Toto Wolff for the Williams driver to replace Covid-struck Lewis Hamilton. The Englishman handed the race seat coveted by every race driver on the planet.

On the day, George has delivered on the faith shown in him and ticked all the boxes on his first day as a Mercedes F1 driver on duty for the team.

The #63 Merc powering around the ultra-fast, shortest lap time ever, Bahrain Outer Circuit in a sizzling 54.713s which was 0.128s faster than Max Verstappen in the Red Bull in second place.

After a subdued early session, Racing Point found legs with Sergio Perez third quickest still enjoying superb form as his F1 career has only two races to run as it stands, while teammate Lance Stroll once again could not find the sweet spot and ended the day 0.169s shy of the sister car.

Esteban Ocon was clearly relishing the layout as he ended the day fourth fastest, best of the Renault brigade and a couple of tenths up on his teammate.

Alex Albon was fifth, a couple of tenths down in the other Red Bull on a day in which Honda-power was useful to have as Daniil Kvyat sixth and Pierre Gasly ninth in the Alpha Tauris – all four of Honda badged cars in the top ten.

Carlos Sainz was tenth, best of the McLaren lads with Lando Norris down in 17th thanks to a power unit issue which kept him in the garage longer than he would have wanted.

Also garage bound, with no meaningful laps and none of them timed before he had to park the Ferrari and watch as the team worked on the car was Charles Leclerc, while his teammate Sebastian Vettel was down in 16th on what was an awful first day for the Reds. The four-time world champion was over a second slower than George’s effort.

Out of the top ten was Valtteri Bottas who was out of sorts all day and comprehensively outshone by his temporary new teammate on the day; the Finn was 11th, six-tenths down on the new bloke in the other Black car. Powder-dry or a rattled driver? Time will tell.

The two F1 debutants Pietro Fittipaldi (Haas) and Jack Aitken (Williams) were 18th and 19th respectively, the pair around three to four-tenths off their teammates, on a day in which they both dialled themselves in as expected and without drama.

Thus after day one in the desert, it is clear George intends to maximise his golden opportunity and is out to win the race on Sunday while Valtteri has yet to react, if he can, to the gauntlet flung at him. Watch this space! 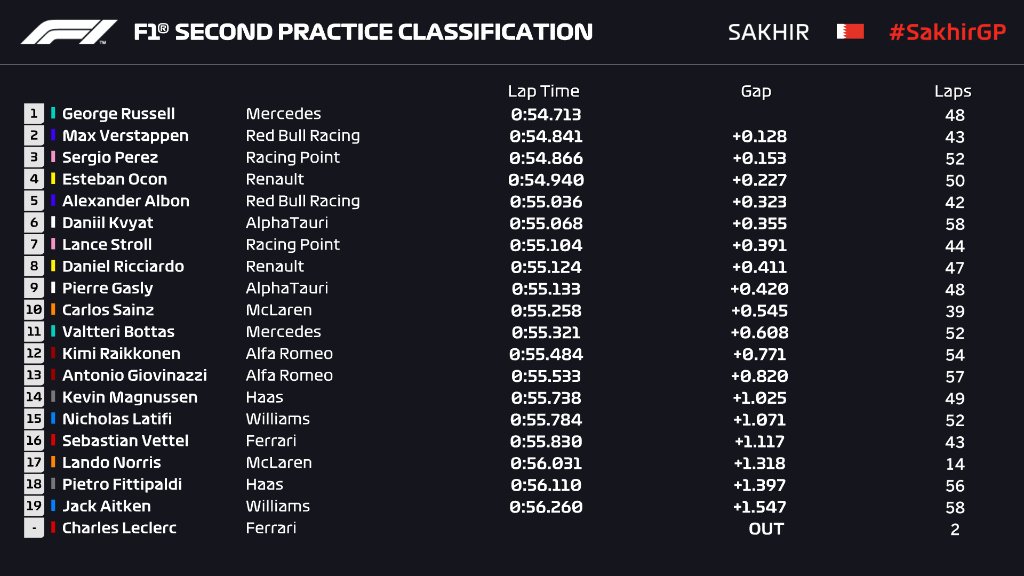