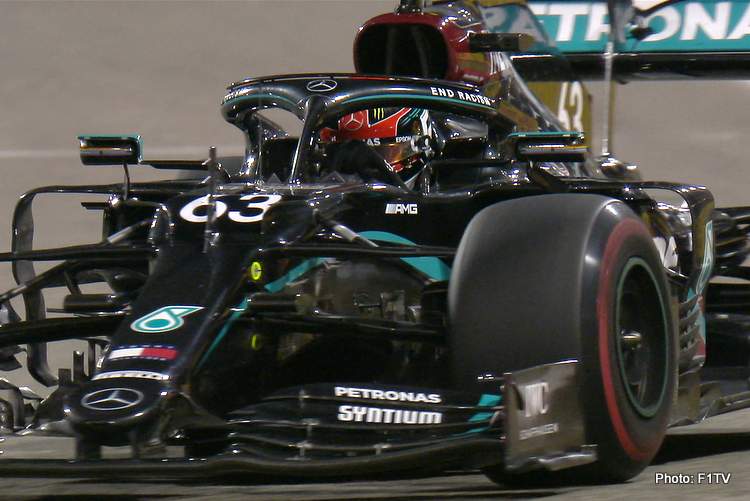 George Russell is intent on making the most of the once in a lifetime opportunity to replace Lewis Hamilton at Mercedes for this weekend’s Sakhir Grand Prix at the short version of the Bahrain International Circuit and got off to the best start by claiming the fastest lap in FP1 under floodlights.

The black Mercedes of the seven times world champion, sported the unfamiliar #63 was in a familiar place, top of the timesheets with a best lap time so far this evening.

IT was an impressive performance as he kept his cool while the spotlight of the F1 world focused on his biggest opportunity he will ever have, like all his peers he has no doubts he can win with the right car, now he has the best at his disposal and he intends to show what he is made of.

His lap time of 54.546s was the quickest lap time set by an F1 at a Grand Prix track, and notably was three-tenths better than Valtteri Bottas in the sister car. The Finn finishing fourth fastest, may well be keeping his powder dry to see what his new teammate has to offer in the other car.

How this duel pans out is one of the most unexpected and much anticipated  sideshow brought about by Hamilton’s misfortune. Get well soon Champ!

The door of opportunity is now open for Russell, while Valtteri faces a true test of his worthiness to sit in the Mercedes garage. In the end, to win you first have to beat your teammate. For now, early in the game it’s 1-0 but the big games are still to come.

Splitting the two Mercs were Max Verstappen and Alex Albon, the Dutchman a tenth and half down on the top time in third and his Thai teammate less than a tenth adrift.

With Ferrari AWOL this season, that was the top two teams hogging the top of the timing screens with Honda power clearly relishing the super-quick layout as AlphaTauri duo Daniil Kvyat and Pierre Gasly fifth and sixth respectively, half a second shy of George’s best effort.

Esteban Ocon was fastest of the Renault powered quartet in seventh with Daniel Ricciardo a tenth slower in ninth, the pair split Ferrari’s Sebastian Vettel in eighth and teammate Charles Leclerc rounding out the top ten; the gap from George to Charles a mere half second.

Making their Grand Prix debuts this weekend are Pietro Fittipaldi, in place of injured Romain Grosjean at Haas and Jack Aitken drafted in for Williams to replace Russell-bound Mercedes. Both were slower than their respective teammates. and have work to do.

Unlike the man at the top of the sheets who was literally plug-and-play for Mercedes. For now he has ticked all the boxes and he progresses as the weekend unfolds is blockbuster stuff for F1 fans and motorsport in general as there is not a single racing driver, young and old, who has not dreamt of driving Lewis’ Merc, George is living that dream for them. 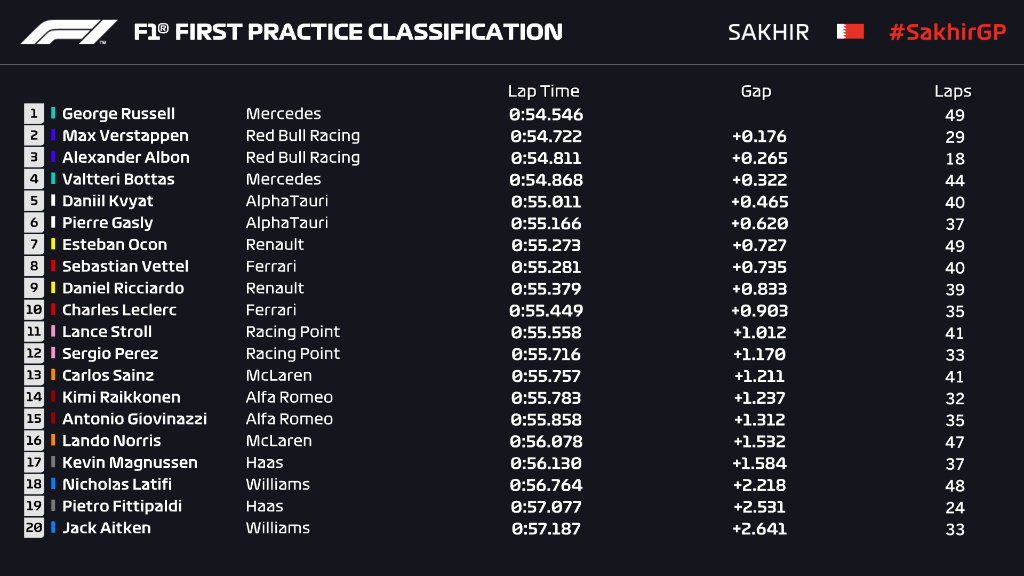