Russell: I think my lap times are a bit deceiving 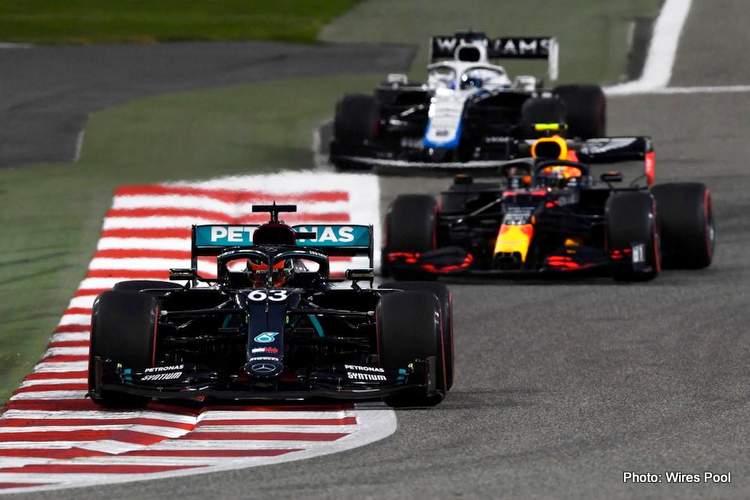 George Russell proved to be the super-sub Mercedes needed to replace for Covid-struck Lewis Hamilton for the 2020 Sakhir Grand Prix.

The 22-year-old Williams driver got an early morning call this week to be told he would be kitting up in Black this weekend and to drive the most coveted race car on the planet. And proceeded to make the most of it by topping the timesheets at the end of both FP1 and FP2 on Friday.

Summing up his first day with the world champion team, George reported, “It was a good first day in the W11 but there’s definitely work to be done. The new track layout is very different to the usual layout here and it’s not an easy track, to say the least.

“It’s going to be very tight in qualifying and we can probably expect a dramatic race. It’s been good to be working with the team today and I’m learning a lot every single lap I’m in the car.

“I think my lap times are a bit deceiving at the moment and not the true representation of the pace. I struggled on the high fuel runs in FP2 and ultimately that’s going to be key on Sunday.

“The Red Bulls were quick on the long runs and Valtteri was quickest in FP2 but had his lap time deleted. It’s going to be close, so we’ll get our heads down tonight. There’s still a lot of work to do to get comfortable in the car and with the set-up.

“But it’s been an encouraging first day and I’m excited to be back in W11 tomorrow,” he added.

George’s table-topping lap time of 54.713 around the spectacularly quick and short Bahrain Outer Layout was six tenths faster than Valtteri Bottas who was out of sorts on the first day.

He admitted as much in his team summary, “It was a tricky day for me. I went over the kerbs in Turn 8 in my first run in FP1 and broke quite a large chunk off the floor, so the rest of the session was a bit of a waste afterwards.

“FP2 felt ok, but obviously I didn’t really get any laps in on the Soft tyre, as my only half decent lap was deleted because of track limits. So, not the best day, but the long runs were pretty consistent. Red Bull look really competitive on those long runs, particularly on the Medium tyre, and George was putting in good laps as well.

“There’s quite a bit of work to do on my side to get everything together for qualifying. The new section of track is really technical and bumpy, so it’s quite challenging and really easy to lose a tenth. On such a short track, in qualifying that could make all the difference.

“It’s going to be intense with so many cars on track, too, so it’s going to be really important to get clean laps in and prioritise the gaps,” added the Finn who is in the spotlight as he goes up against the precocious newcomer in the #63 car.

Mercedes track engineer Andrew Shovlin gave the team perspective, “It’s been an interesting day with such a short lap and so few corners. Removing the mid-speed and high-speed corners does change the nature of the track somewhat and we’ve been tuning the set-up through the day to get the car working well in the slower corners, which weren’t our strength last week.

“George has settled in well and both he and Valtteri look to have the pace to be in the fight for pole position. Our long runs weren’t quite there today; the Red Bull looks to be stronger in that regard.

“So, we’ll focus some effort tonight towards understanding the limitations on race fuel, but there are a few things to work on so we’re optimistic we can make some progress,” concluded Shovlin.