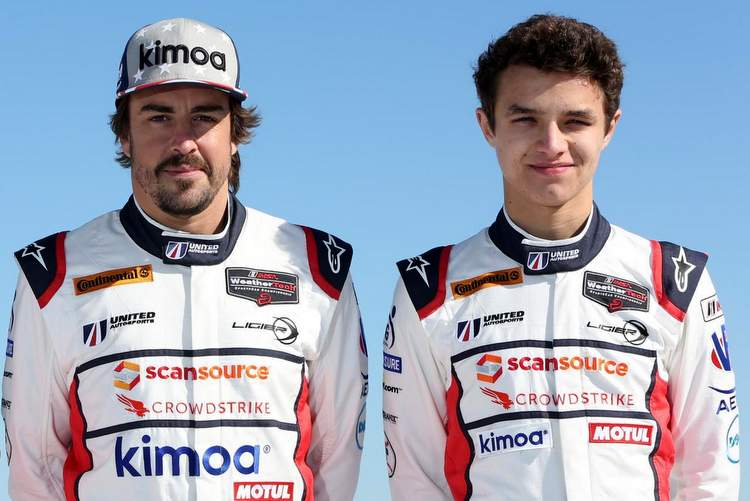 Fernando Alonso should not be allowed to take part in a Formula 1 ‘young driver’ test at the age of 39, McLaren’s Lando Norris said on Thursday after Renault confirmed the two-times world champion’s involvement.

Spaniard Alonso, who has started 311 grands prix in an F1 career dating back to 2001, is making a comeback with Renault next season after two years out.

The test in Abu Dhabi is scheduled for Dec. 15 after the season-ending grand prix at Yas Marina.

Renault team boss Cyril Abiteboul said the FIA acceptance recognised “our commitment to young drivers throughout junior motorsport and to Fernando’s own dedication to furthering the careers of young talents.”

Norris, who turned 21 last month, told Reuters that was unfair and “a bit of a joke”.

“He’s double my age pretty much so that must make me extremely young,” said the Briton.

“It’s fairly obvious Fernando’s not a young driver. It’s not like he’s only done one or two races… and he’s been doing countless tests already this year in Formula 1 cars. So I don’t get it.

“I don’t get why they’ve changed the rules just for him. I think it’s quite silly and it shouldn’t be allowed.”

UNFAIR DECISION
Norris said it was unfair for young drivers missing out on an opportunity and for others who are changing teams and are not allowed to take part.

Other experienced F1 drivers like Switzerland’s Sebastian Buemi and Poland’s Robert Kubica are also set to test for Red Bull and Alfa Romeo respectively, but neither will be racing next year.

Alonso, who has been out of F1 since he left McLaren in 2018, will drive the team’s 2020 car alongside Chinese Formula Two racer and test driver Guanyu Zhou.

Rules limit participation in the test to drivers who have not driven in more than two F1 races unless allowed to by the FIA.

Alonso, a 32-times race winner, has also competed in the Dakar Rally, Indianapolis 500 and has twice won the 24 Hours of Le Mans.

The Spaniard, who won both his titles with Renault and is set to replace Australian Daniel Ricciardo, drove the team’s current RS20 car in a ‘filming day’ in Barcelona in October. He has also tested the team’s 2018 car.

Ricciardo made light of the situation.

“I think Fernando has been maintaining a lot of health and fitness. He looks in pretty good shape and pretty young. I think to the naked eye he certainly passes as a young driver,” he quipped.