Russell: I got a phone call from Toto at 2am… 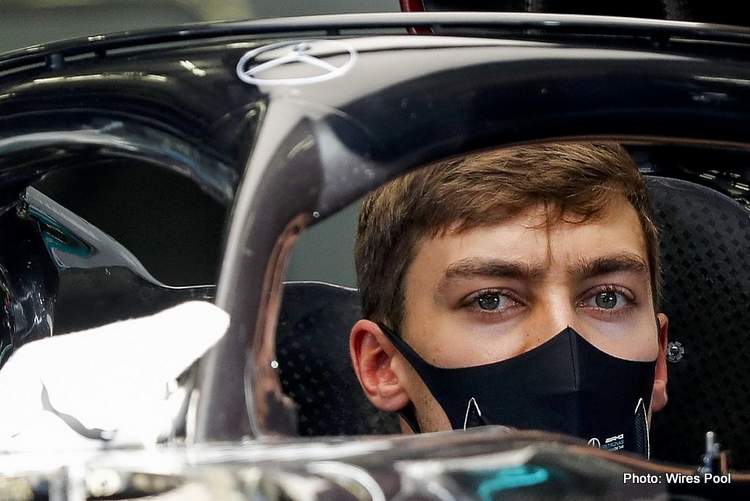 George Russell discovered he could be replacing Covid-struck Lewis Hamilton for this weekend’s Sakhir Grand Prix following a 2am phone call with Mercedes boss Toto Wolff which the young Briton took in the bathroom.

Russell will step into the fastest car on the Formula One grid in Bahrain this weekend after Mercedes elected to snap up the 22-year-old following Hamilton’s enforced absence.

Mercedes reached an agreement with Williams to release their junior driver Russell from his contract with the British team on Tuesday.

Russell, in just his second season in the sport, has failed to score a point in his uncompetitive Williams machinery, but, remarkably will now be among the favourites to win on Sunday at the penultimate round of the year.

“I don’t think it has sunk in yet because it has all happened so quickly,” said Russell. “It has been an intense 48 hours and I was very anxious on Tuesday waiting to find out if we could strike a deal with Williams.

“I got a phone call from Toto at 2am on Tuesday morning. I was in the bathroom which was slightly awkward. I answered the phone and he said ‘George, are you in the bathroom?’ And I said, ‘yes, sorry, I am’.

“He replied by saying ‘unfortunately Lewis has got Covid. He is healthy, and he feels fine, but we want you to drive.’

“It was then a bit of a sleepless night, but we made it happen the following day. I had 64 phone calls on Tuesday, pinging between so many different people, so I am glad we got there in the end.”

Russell said he hopes to touch base with Hamilton throughout the weekend. The seven-time world champion is serving 10 days of isolation after returning a positive Covid-19 result on Monday.

“I am yet to speak to Lewis,” added Russell. “I dropped him a message wishing him well.

“He has his own agenda to look out for at the moment, making sure he recovers and gets better. I am sure isolation is quite a stressful time for him. I have a good relationship with him and I am sure we will speak over the course of the weekend.”

Standing at 6ft 2in, Russell is significantly taller than the 5ft 7ins frame of Hamilton. Russell admitted it will be a “tight squeeze” to fit in to a cockpit custom-made for his record-breaking compatriot.

He will also be forced to drop one shoe size from his normal 11s to ensure he fits in the Mercedes machinery.

“It is slightly uncomfortable, but I am sure I can endure the pain to take the opportunity,” he added.

The whirlwind 48 hours caps a rollercoaster year for Russell. It was suggested only in October that he could be turfed out of the sport, with Williams’ new owners rumoured to be considering signing a driver whom brings cash to the British team.

“I would say fairy-tale is the wrong word,” Russell added. “But this is not the way I envisioned my first opportunity in a Mercedes race car.

“It is in incredibly odd circumstances, but this year has just been mental on all accounts, not just for me, but the problems going on in the world.

“From a personal perspective, it has been up, down, left, right, centre, and this is just another twist in the tale. It still seems a bit surreal and I am sure in a few years I will look back on 2020 and think ‘what an unbelievable year’.”

Hamilton has won 11 of the 15 races staged this season. So, can Russell, a 1000-1 outsider for Sunday’s race before his promotion to Mercedes, win in the same car?

“From my side, there is no pressure because I am being thrown in at the last moment,” he replied. “I have not driven in the Mercedes simulator for two years, and I have so much information to learn.

“I am not going to put any additional pressure on myself. There have been no targets placed on me by Mercedes or Toto because you cannot judge someone on one race.”