Hakkinen: To watch Romain climb out of the car was just fantastic 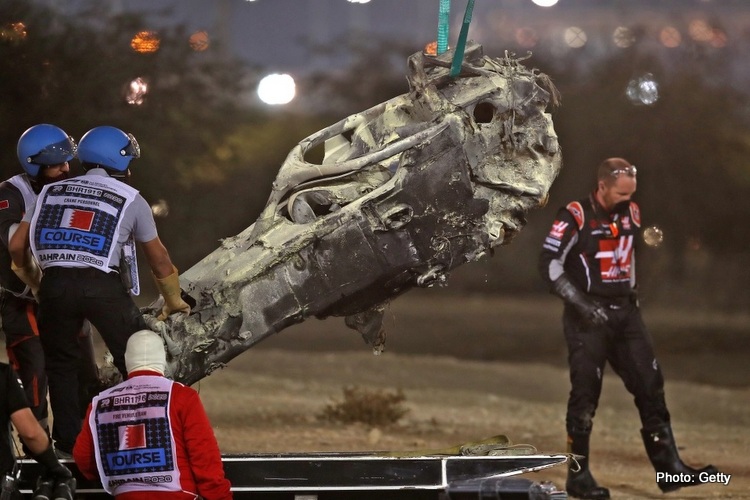 Two-time Formula 1 world champion Mika Hakkinen has hailed the safety innovations that allowed Romain Grosjean to extract himself from his burning car after his crash at the Bahrain Grand Prix, comparing it to his own incident 25 years prior in which he was unable to do so.

Despite having careened into the barriers with an impact that was measured at 53G, Grosjean was able to walk away from the incident relatively unscathed thanks to both his car’s halo head protection system and the durability of his fireproof clothing.

Writing in his regular post-race column for Unibet, Hakkinen noted the difference the halo had made in Grosjean’s escape, compared to both Niki Lauda’s crash at the 1976 German GP, and his own almighty shunt at the 1995 Australian GP.

“I have no doubt that the halo prevented Romain’s helmet coming into direct contact with the barrier,” he wrote. “This was really critical, as head injuries need to be avoided whenever possible.

“The explosion and fire caused by the damaged fuel system was potentially very serious, but thanks to the fact that Romain had been protected from the initial impact he was conscious, and therefore able to get out of the car. His survival also shows just how good the fireproof overalls and underwear are, together with the strength of the helmet and visor.

“In my accident in Australia in 1995 I was knocked unconscious, but fortunately I did not have a fire. Niki Lauda was not so lucky when he suffered his big accident at the Nurburgring in 1975, and it was only through the bravery of other drivers that he was freed from the wreckage of his car.

“To watch Romain climb out of the car was just fantastic, but I also want to mention the actions of Dr Ian Roberts who arrived on the scene within a matter of seconds, helped the marshal tackle the fire and assisted Romain. In a situation like this every second counts.”

“I wish Romain a speedy recovery from the burns to his hands, and can only congratulate the FIA, Formula 1 and the teams for their brilliant work to improve safety. 2020 has been a difficult year for everyone, but in Bahrain we had good reason to celebrate a positive outcome to a such a terrible accident.”