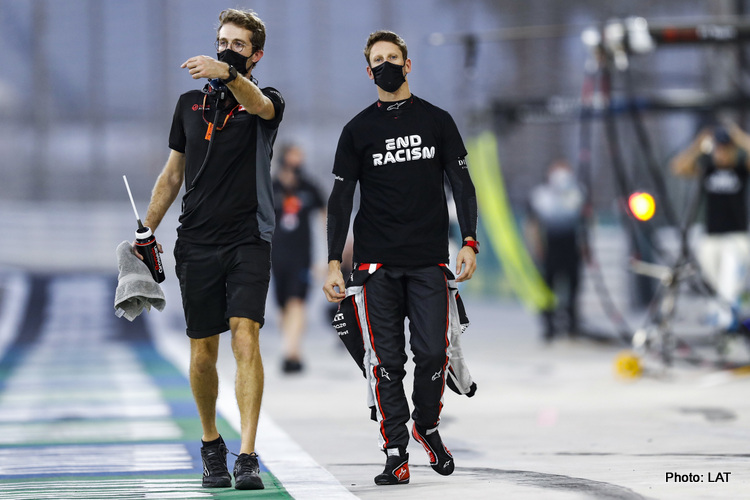 Romain Grosjean intends to return for the final race of the 2020 Formula 1 season in Abu Dhabi, according to his Haas team boss Guenther Steiner.

Currently recovering in hospital after sustaining burns in a horrific crash during Sunday’s Bahrain Grand Prix, Grosjean has already been ruled-out for this week’s second race at the Sakhir Circuit, with reserve driver Pietro Fittipaldi deputising for him.

However with his contract up at Haas at the end of the season – and his F1 career likely over as a result – the Frenchman has told Steiner he wants to race one last time.

“Romain would like to do it,” Steiner said of Grosjean. “I spoke with him yesterday, he really wants to be in Abu Dhabi.

“I said to him ‘Try to get better and we will speak on Monday about how you feel, if it’s doable’. We will cross that bridge when we get to it.

“At the moment we have got plenty of time. Pietro is here, Romain is here. We just need to see how he feels. I’m not in a hurry to decide now. It depends on his health.”

Asked whether Grosjean was mentally ready to return to a F1 car so soon after the incident, Steiner said: “Yes, absolutely. That is his aim now, to heal up and he wants to do Abu Dhabi.

“Yesterday he was mentally very stable, very good about it. The guys today have said he is very good. He is just trying to get better to be in the car in Abu Dhabi. That shows he wants to keep on doing it.”

And while the Frenchman’s discharge from hospital has been pushed back to Tuesday, Steiner says there have been no complications.

“I spoke with one of his guys and they’ve done something on the burns,” he explained. “I don’t know exactly what. He is staying another night in the hospital, but that’s nothing to be pre-occupied with. It’s a safer environment.

“Everything is going good. The doctors are very happy. There are no setbacks or nothing, so staying another night doesn’t mean there is a setback or a problem. It’s just safer to stay another night longer to help him heal quicker.”