Marion Grosjean: It didn’t take one miracle but several 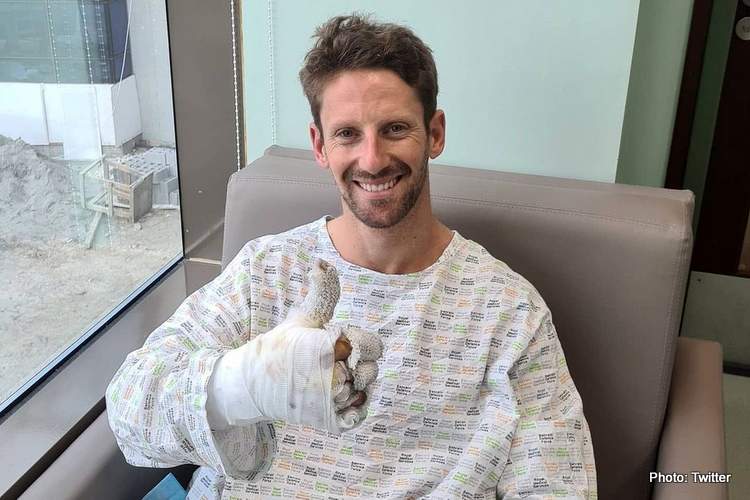 Grosjean will spend a second night in the Bahrain Defence Force Hospital with burn injuries sustained to his hands in the biggest accident of recent F1 memory. It is anticipated that he will be released on Tuesday.

Grosjean has already been ruled out of this weekend’s Sakhir Grand Prix, which is being staged at the same Bahraini venue that almost cost him his life.

The Frenchman posted a picture on Monday giving the thumbs up with his left hand heavily bandaged. “Loving life”, he wrote.

He is expected to remain here in the Middle East, rather than travel back to his home in Switzerland when he is discharged.

“I don’t want to lie, the words aren’t coming easily. That will make him laugh, he who knows how much I like to talk. He to whom I always write so much.

“And then I didn’t know what photo to post either. Which image to keep from yesterday? The flames? Him, held by the arms by his saviours? The wreckage of the car?

“I’ve chosen this one, a bit stupidly. Because we’re both wearing the same T-shirt of his GP2 title. The one I still sleep in sometimes. I would have preferred if it to have the word ‘superhero’ on it rather than ‘champion’ – but if we have to, we’ll have it custom-made. For the children, because that’s how we explained the inexplicable.

“On Twitter, I used useful words, urgent words, to protect them above all. I mentioned the ‘shield of love’ that protected him.

“Thank you to our children, who pushed him to pull himself out of the fire. Thank you to his courage, his determination, his strength, his love, his physical training that probably kept him alive. It didn’t take one miracle but several yesterday.”

The halo device – a three-pronged titanium protection system which sits above the driver’s head and was introduced in 2018 – played a prominent role in Grosjean’s remarkable escape.

Grosjean was a pallbearer at countryman Jules Bianchi’s funeral in 2015.

Bianchi, the sole F1 driver to have been killed since Ayrton Senna, died nine months after he crashed into a tractor at the rain-hit Japanese Grand Prix.

The halo was pushed through by the FIA following the devastating brain injuries Bianchi sustained in the accident.

Marion continued: “Thank you to the family of Jules Bianchi; to his father Philippe, who I think of constantly (and) to Jules himself.”

Grosjean’s car split in two and burst into flames after he pierced through a steel barrier at 137mph following a collision with AlphaTauri’s Daniil Kvyat on the opening lap.

Grosjean scrambled to get out of his burning wreckage for almost half a minute before leaping to safety. The force of the impact registered at 53G.

“Romain Grosjean is continuing his convalescence at the Bahrain Defence Force (BDF) Hospital having remained there overnight following Sunday’s incident at the Bahrain GP,” a statement released by his Haas team said.

“Treatment on the burns Grosjean sustained on the back of both his hands is going well. It is anticipated he will be discharged from the care of the hospital on Tuesday 1st December.”

Stepping into Grosjean’s shoes this weekend is Haas’ Brazilian reserve driver Pietro Fittipaldi for his F1 debut. The 24-year-old is the grandson of double world champion Emerson Fittipaldi.