In The Pitlane: Safety doesn’t happen by accident 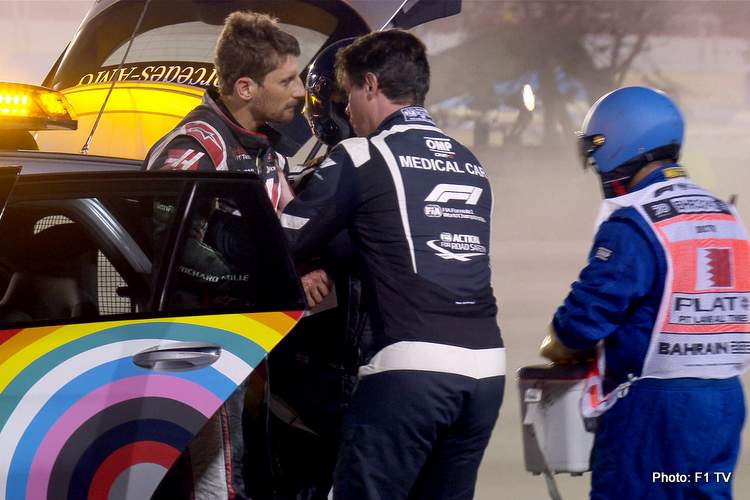 In Bahrain, the F1 community witnessed the horrific crash of Romain Grosjean and at the same time what only can be described as some sort of miracle as Grosjean appeared from the flames into the brave hands of Dr Ian Roberts.

Grosjean no stranger to a crash or two prophetically commented in a recent interview, “I’ve hit the wall at over 200mph and I’m still here.”

Many questions need to be answered over the coming weeks and lessons will need to be learned as F1 can never be complacent when it comes to safety.

There have been a series of safety-related issues in recent race weekends with incidents involving the safety car, marshals on the track, and in a chilling reminder of Jules Bianchi’s fatal accident back in 2014, there was a recovery truck in use when qualifying had restarted at the Turkish GP.

So, worrying times for F1.

F1 has come a long way in safety terms from the days when deaths were deemed to be an acceptable part of racing with the sport viewed as some sort of gladiator’s spectacle.

Grosjean’s accident was a reminder of drivers who often died in a horrific fireball with trackside marshals wearing civilian clothing tackling the inferno with nothing more than bog-standard fire extinguishers.

Sir Jackie Stewart was a vocal and active safety campaigner over many years alongside the late Professor Sid Watkins and Charlie Whiting, but it was an uphill battle.

All this was to change due to in no small part two men Max Mosley FIA president and Bernie Ecclestone the commercial rights holder.

The ill-fated weekend of the San Marino Grand Prix in 1994 which saw the tragic deaths of Roland Ratzenberger and Ayrton Senna was a game-changer.

The sport was plunged into crisis with attacks from all sides.

Governments around the world pondered banning the sport and manufacturers questioning their involvement with the sport.

TV companies started to make threats about withdrawing coverage and cancelling contracts, but the greatest risk was sponsors exiting the sport after being nervous about the link between their products and the loss of life.

Something had to be done so Mosley launched a zero-mortality goal and announced the formation of the Advisory Expert Group chaired by Professor Sid Watkins, to research and improve safety in motor racing.

Advances in safety have been ongoing ever since with the introduction of safer cars due to carbon fibre survival cells, wheel tethers, the HANS device, visor panels, and Halo to mention a few.

Safety and in particular research were always hampered because it was expensive so how was all this progress paid for all?

The funding came through a deal signed in 2001.

After a bit of clever negotiation between Ecclestone and Mosley, the FIA sold a 100-year licence to then owners CVC capital partners for an initial payment of $313 million and an annual dividend.

Mosley stated at the time: “Over the totality of the contract, and on an annual basis, the sum we have accepted represents billions of dollars. Looked at from that point of view, it is a huge amount of money.”

So, the FIA Foundation was established with one of its aims to further road safety including motorsports.

It has been a successful transformation with only one fatality in F1 with the death of Jules Bianchi in 2014 from injuries suffered during the Japanese Grand Prix.

Long may it continue.

On a footnote: A feature of race weekends is the deployment of the safety car when the all-powerful Mercedes AMG GT R springs into action.

The commercial arrangements for the safety car are confidential but it cannot be underestimated the value to Mercedes.

Mercedes have supplied the safety and medical cars since 1996.

The TV coverage to millions of fans globally when the safety car is on track provides Mercedes with a rolling advert and plays to a key Mercedes marketing strategy, safety.

The subliminal message to car owners is when there is an accident you can rely on the safety of a Mercedes car.

So in a demonstration of their commitment to Aston Martin unconfirmed reports state Mercedes have ‘allowed’ Aston Martin to do a deal with F1 to provide the safety and medical cars at more than half of the Formula 1 races next season.

Underlying the marketing significance of the safety car Aston Martin will provide the cars in countries where it has a larger market share, with Mercedes retaining the rights in countries such as the US and China.

The first use of the Safety Car in F1 was at the 1973 Canadian Grand Prix. It was to be an eventful introduction as the Safety Car took its place in front of the wrong driver resulting in some cars deemed to be incorrectly one lap down.

The chaos took several hours to resolve before the actual winner could be announced, no surprise then it was a further 20 years before the safety car was ever used again.

The car in question, a yellow Porsche 914.