F1 medical delegate: Only a small window to help Grosjean 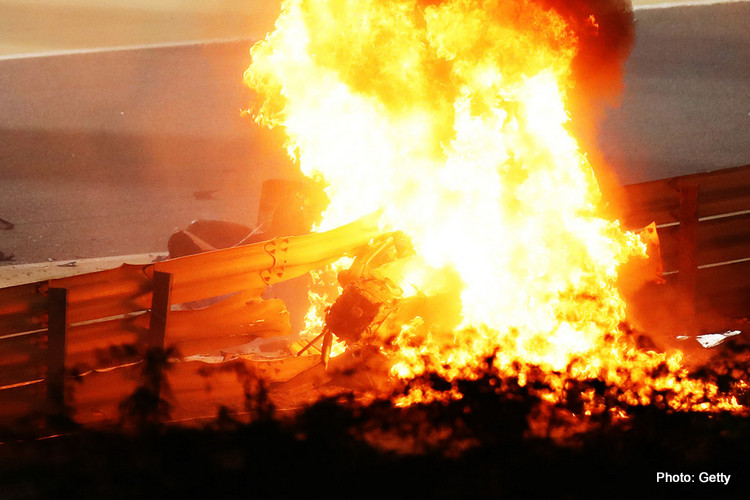 The French driver’s Haas was torn in half and engulfed in flames as it speared through protective barriers immediately after the start, following contact with the AlphaTauri of Daniil Kvyat.

“It looked like an oven,” Roberts, who was seen rushing towards the blaze, wearing an open-face helmet, told reporters.

“It was red with flame and you could see him trying to get himself out and he was gradually getting himself further and further out.”

Roberts, who is also the FIA’s F1 medical rescue co-ordinator, medical car driver Alan van der Merwe and fire marshals were the first on the scene and were hailed as heroes for braving the flames and getting Grosjean to safety.

“There was a fire marshal rapidly on scene and that push of the extinguisher, the powder pushed the flames back enough, once Romain was high enough we could get him over the barrier and away,” Roberts said.

“But it was a very small window because as soon as the extinguisher powder went forward, the flames were coming back pretty soon afterwards.”

He said he would not have been able to extricate Grosjean with the fire blazing if the 34-year-old been unable to free himself from his car’s wreckage.

Roberts, who like the F1 drivers wears fireproof overalls, joked that the fire had helped his tan but that he was unhurt otherwise.

His first priority, he said, had been to make sure Grosjean, who escaped with burns to his hands and was being treated overnight at a nearby hospital, had no serious injuries.

“It was just a matter of getting him sat down briefly just to check that the life-threatening things were covered and then getting him away from the flames.”

Grosjean, in a video from his hospital bed posted online, credited the halo head protection system, added to cars in 2018, with saving his life.