Hamilton: I’m not thinking about my 100th pole 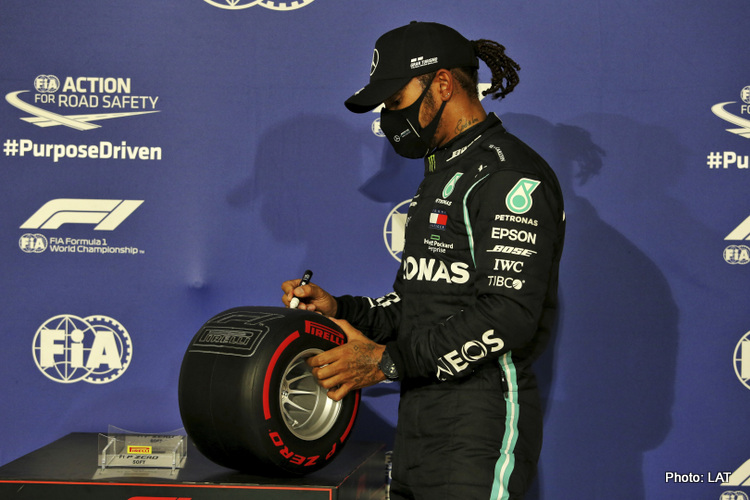 Seven-times Formula 1 world champion Lewis Hamilton set himself up to tick off yet another milestone in a record-breaking year, after taking pole position for the Bahrain Grand Prix on Saturday.

The 35-year-old Briton’s dazzling display under the floodlights earned him a record-extending 98th career pole.

With two races left, a second race in Bahrain around the Sakhir track’s shorter “outer loop” layout followed by the season finale in Abu Dhabi, Hamilton could well end the year with 100 poles.

“I really haven’t even thought that far,” Hamilton told reporters over a video conference when asked about the prospect of becoming the first F1 driver to chalk up a triple-digit pole position count.

“It’s been already such an incredible year. Anything from now is just an added bonus. It’s not something I’m thinking about.

“I’ll get there eventually but it’s not necessary that it’s in the next two, but I’ll be pushing as hard as I can, that’s for sure.”

Hamilton has rewritten the record books this season.

Two weeks ago in Turkey he equalled Schumacher’s record tally of seven world titles to become, on account of having more wins, poles and podiums than the German, the most successful driver in F1 history.

His qualifying performance in Bahrain, where he found half a second on his final flying lap to put himself 0.289 seconds clear of team mate Valtteri Bottas, showed that his success has not slowed him down.

His 10th pole position set him up as favourite to score an 11th win of the year on Sunday.

Two more wins would see Hamilton celebrating his most successful season and make him only the third driver since Schumacher and Sebastian Vettel to chalk up 13 victories in a year.