Grosjean: Without the halo I wouldn’t be speaking to you 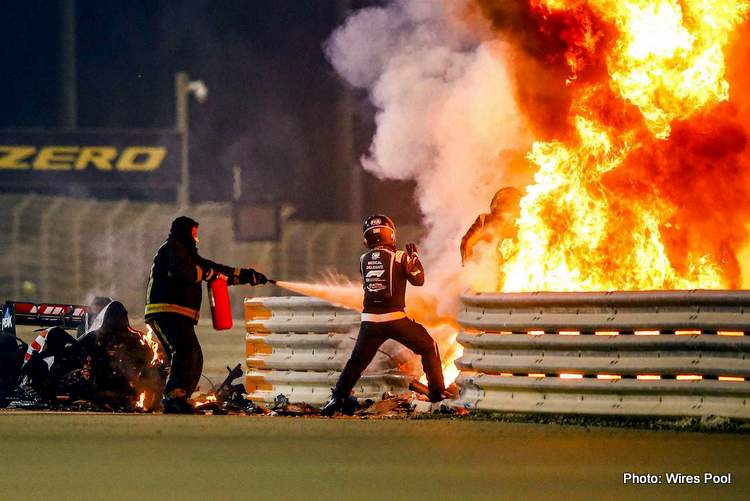 Romain Grosjean believes he would not be here today if the halo had not saved him from a fiery death on Sunday during the 2020 Bahrain Grand Prix.

Countless replays and images of the horrific accident have flooded social media and websites across the internet on a night in which Formula 1 – Romain Grosjean, in particular, was granted a miracle.

It was also a night in which the countless hours and research committed to safety of F1 cars has been rewarded. A life was saved again by the halo today for all to see, and Romain, not a fan of the device, has hailed it as his life saviour.

In a video posted on social, filmed from his hospital bed with hands bandaged Grosjean spoke for the first time after his ordeal, “Hello everyone, just wanted to say I’m okay, well, sort of okay. Thank you very much for all the messages.

“I wasn’t for the halo some years ago but I think it’s the greatest thing we brought to Formula 1 and without it, I wouldn’t be able to speak to you today.

“Thanks to all the medical staff at the circuit, at the hospital, and hopefully I can soon write you quite some messages and tell you how it’s going.”

An update from Romain himself. Pleased to see you’re in good spirits! We hope you make a speedy recovery 🙏 pic.twitter.com/njnjjH4GBi

The FIA posted on their site:

The FIA advises that an incident occurred during the opening lap of the 2020 FIA Formula 1 Bahrain Grand Prix today, 29/11/2020, involving car #8, Romain Grosjean.

The driver was immediately attended to by emergency and medical crews. The driver self-extricated, and was conscious at all times. He was taken to the medical centre before being transferred to Bahrain Defence Force (BDF) Hospital by helicopter where he is undergoing further evaluation.

Following medical evaluation by doctors at the Bahrain Defence Force (BDF) Hospital Haas F1 Team driver Romain Grosjean will remain in hospital overnight to be treated for burns sustained on the back of both hands after his opening lap incident at the Bahrain Grand Prix. All X-rays performed on Grosjean came back clear of fractures.

Updates will be given when further information is available.

So relieved that @RGrosjean is safe. Thanks to Dr Ian Roberts and the @FIA teams for their courageous and efficient intervention. We have always put safety at the top of our priorities and will continue to do so.#F1 #BahrainGP 🇧🇭 pic.twitter.com/64xubWCgUH