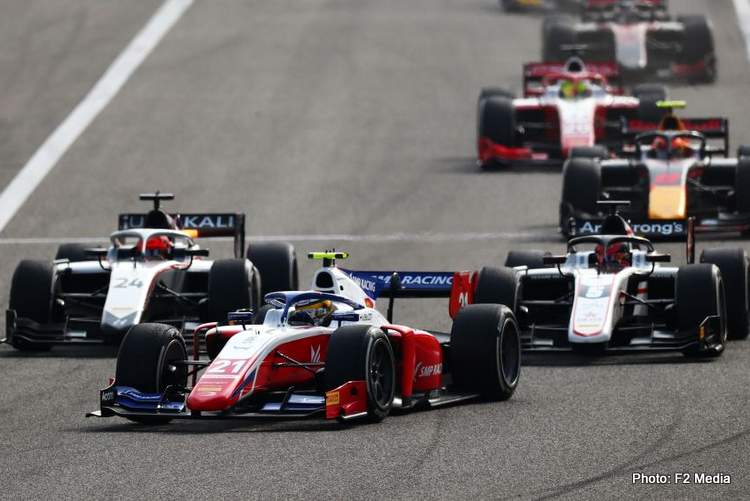 Robert Schwartzman made a dominant return to the top step of the Formula 2 podium, leading the Sprint Race from lights-to-flag in Sakhir for his fourth win of the season and his first since Round 7.

The Prema driver beat out his Championship rival, Nikita Mazepin, who moved up to third in the standings and kept himself in the title fight heading into the season finale. Louis Delétraz clinched his fifth podium of the year in style, making up 13 places with a stunning charge through the field from 16th.

Championship leader Mick Schumacher will take a 14-point lead in the final round of the year, finishing in seventh, with his main rival, Callum Ilott failing to score after a collision with Daruvala. Yuki Tsunoda was also unable to score after a coming together with Marcus Armstrong in the opening laps left him with a puncture and chucked him to the back of the field.

Shwartzman stuttered ever so slightly off the line, as Tsunoda dived through the middle and attempted to take the inside line at the first turn, but the Russian recovered superbly, defending the position at the corner and getting back ahead.

Tsunoda’s teammate, Daruvala, got an equally strong start from sixth, lunging up to fourth when the lights went out and getting ahead of Schumacher and Mazepin, who both lost a position. The title rivals began a back and forth and Schumacher narrowly avoided contact as Mazepin budged past him at the first corner.

Tsunoda’s strong start came unravelling as contact with Armstrong left him with a puncture on his right rear and forced him into an unwanted pitstop on Lap 2, returning 21st. Meanwhile, Shwartzman had broken away from the pack, building a 2.6s gap over Armstrong.

Racing was brought to an abrupt halt as Theo Pourchaire’s fire extinguisher went off, forcing him to pull over onto the side of the road and retire, bringing out a Safety Car. Delétraz made the most of the opportunity, diving into the pits and switching to the medium tyre.

Shortly after the restart, Daruvala got caught up in a three-car collision at Turn 10. Ilott had spotted his title rival, Schumacher, lock up on entry and attempted to dive down the inside, but locked up himself and collided into a helpless Daruvala, who was sent spinning out.

Schumacher managed to get away scot-free, but Ilott wasn’t as lucky, with the UNI-Virtuosi man forced into the pits for a new front wing. His misery was then compounded as he was handed a drive-through penalty, which all but ended his chance of points.

Meanwhile, Pedro Piquet had made the most of the carnage, slipping past Schumacher and nabbing P4, before the Virtual Safety Car was deployed to clear up Daruvala’s Carlin.

Race leader Shwartzman brushed off the restart to continue his assault to the chequered flag. Armstrong wasn’t as fortunate. Despite initially pulling away cleanly, Mazepin fired past for second and left him to deal with the plucky Piquet.

The Charouz racer was immediately on his tail, sliding left and right as he searched for a gap, eventually finding space and firing past. Schumacher was under pressure behind him, as Guanyu Zhou lunged in-front for fifth.

Deletraz was making the most of his fresher medium tyres, darting through the pack and into the points. Moves on Christian Lundgaard, Schumacher, Zhou and Armstrong all followed as the Swiss racer stormed towards a potential podium place.

Standing in his way was his teammate, Piquet, but the two never got a chance to battle as the Brazilian suffered from a mechanical issue and was forced to pull over and retire – ending his chance of a maiden podium.

Shwartzman cruised to a fourth win of the season ahead of Mazepin and Deletraz. Armstrong retained fourth ahead of Zhou. Lundgaard, Schumacher and Drugovich took the final two points places.

Robert Schwartzman: “I am happy to be back here – it took a while. This is my first win since Spa. I am really happy with the work that the team done, because we had a big problem with our pace at the beginning of the weekend. We finally managed to get better and during the race, everything was going well.

“There was a Safety Car and Virtual Safety Car, but I did a decent job at the restart, so in the end it was a comfortable race. A good job from the team and a big thanks to them.”

Next up Bahrain II

The field will have just a few days to catch their breath before the season finale takes places here in Sakhir, Bahrain on December 4-6. Schumacher will be looking to clinch the title at the earliest opportunity, with Ilott and Mazepin now his main rivals. 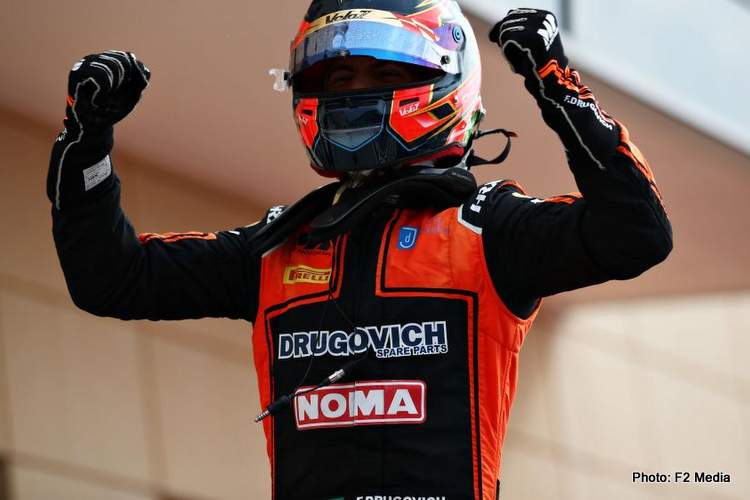 Felipe Drugovich took his third win of the season in Sakhir, and his first on a Saturday, as he stormed to victory in the Feature Race. The MP Motorsport rookie is now tied for most wins in 2020, as he finished with a solid 14.8s advantage over polesitter Callum Ilott.

Ilott continued to chip away at Schumacher’s lead at the top of the Drivers’ Championship, slicing it down to just 12 points with three races to go. Starting from 10th, the German-produced a sterling recovery drive to fourth, but an 11th podium proved an overtake too far, with Daruvala resiliently taking third to score a maiden podium in F2.

The drive of the day belonged to Daruvala’s teammate, Yuki Tsunoda. The Red Bull junior began the afternoon at the back of the grid, but magnificently made his way up to sixth, behind Nikita Mazepin.

Title-chasing Ilott’s weekend had gotten off to a superb start, with the UNI-Virtuosi man taking pole by nearly four-tenths in Qualifying.

But, he wasn’t quite as quick off the line on Saturday as Drugovich flung his MP machine down the left of the Briton ahead of the first corner. Drugovich braked too early and Ilott just about clung on at the exit, but then the Brazilian found further pace and dragged himself in-front, ahead of Turn 2.

Schumacher had struggled to 10th in Qualifying but made his customary strong start when the lights went out, flying all the way to fifth by the first corner alone.

Having made it that far, Schumacher went toe-to-toe with Guanyu Zhou for P4, but his back tyre caught the front wing of the Virtuosi. Schumacher avoided any damage and after a brief wobble, dived ahead, before Zhou was forced into the pits with damage.

Schumacher was now looking at the back of Marcus Armstrong and out-braked the Kiwi at the first corner of the second lap, but Armstrong wasn’t planning on surrendering the position that easily. The ART man fought back, playing on the fact he had nothing to lose, while Schumacher couldn’t afford any risks.

Having survived the challenge of Schumacher, Armstrong got a move on and dispatched of Ilott at Turn 4, leaving the Briton to battle with his main title rival.

The front two had made the bold decision to start on the softer compound, while the majority of the grid opted for the hard Pirellis. Ilott looked to be feeling the consequences, with his mediums beginning to struggle.

Meanwhile, Schumacher’s hard tyres looked in decent shape and it didn’t take the German long to make the most of this, gliding past Ilott at the first corner. Schumacher was then gifted second, as Armstrong locked up and handed him a view of the race leader

Ilott soldiered on to Lap 13, but his pitstop was slow and cost him precious time, eventually returning in 17th. Race leader Drugovich took his mediums three laps further and returned in P12, one place ahead of Ilott. Schumacher was handed the lead, before pitting with 12 laps to go and returning in sixth.

Schumacher’s teammate, Robert Shwarztman, made the alternate strategy work from 14th, getting over a difficult Qualifying session and making his way to seventh behind his Championship rival Mazepin.

It was a similar story for Tsunoda, who’d said in the leadup to the weekend that the track had “Lots of overtaking zones.” The Carlin racer was making the most of these, beginning the day in 22nd, he had fought all the way to reverse grid pole. He wasn’t finished there, as an overtake on Shwarztman came next, before he followed Mazepin past Armstrong for P6.

Drugovich had opened up an eight second gap at the front, while Schumacher had fought back up to fourth, getting stuck behind Jehan Daruvala, who was battling for a first podium in F2. The German made multiple attempts to take the honour away from the Carlin driver, but opted to air on the side of caution and settled for fourth.Drugovich comfortably closed out the victory, with Ilott taking second and Daruvala holding on to third. Mazepin finished ahead of Tsunoda in sixth, with Armstrong in seventh and Shwarztman eighth. Ticktum and Jack Aitken completed the top ten.

Schumacher remains at the top of the Drivers’ Championship with 203 points, 12 ahead of Ilott on 191. Tsunoda is third with 157, ahead of Mazepin in fourth on 150 and Christian Lundgaard in fifth, with 145.

Felipe Drugovich: “An amazing race. That is my first Feature Race win and it feels unbelievable. We got a good start and I got by Callum (Ilott) at Turn 1. The job was a bit easier after that because I got clean air out in front. The pit stop went well and from there it was about keeping the pace. We were really fast, so a big thanks to the team.”