Lando Norris: I made a mistake at turn 1 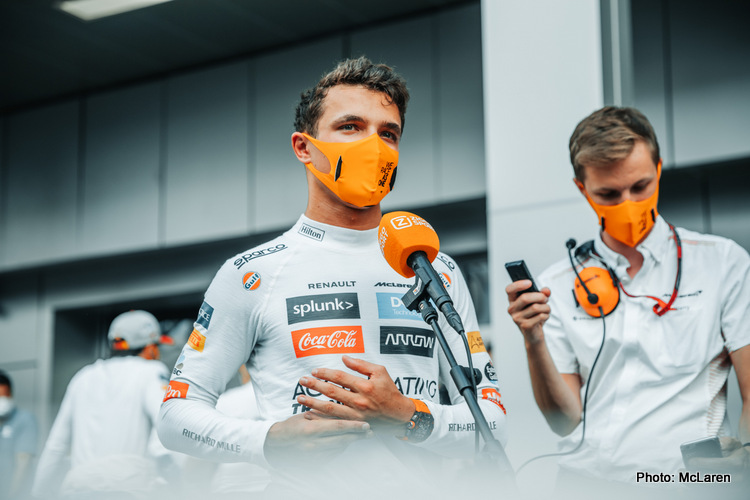 McLaren driver Lando Norris said that a mistake at turn 1 during qualifying for the Bahrain Grand Prix cost him a potential P6 grid spot ahead of Sunday’s race.

The young Brit will start ninth and ahead of his teammate Carlos Sainz, who suffered an issue, but behind Sergio Perez of Racing Point and both Renault drivers as McLaren battle for third in the constructor’s standings.

Norris believes that the mistake cost him around two tenths over the lap and said that the margins were so fine in the midfield that any sort of error could see a driver drop three of four positions down the grid.

“I made a mistake at turn 1 which cost me two tenths, which is pretty frustrating because obviously two tenths would have put me probably behind Perez,” he told his post-qualifying press conference.

“I don’t think we could have beaten Perez, but it would have put me behind him, which was P6 I think and ahead of both Renaults. So there was just a bit more potential today, it wasn’t like we didn’t have the speed, I think we did but I made one mistake at turn 1 and it proved costly today. I think it shows how close it is, but also shows just how difficult it is to put everything together and one mistake can be three or four positions.”

The 21-year-old is currently eighth in the drivers’ standings with 74 points, 26 points adrift of Perez in fourth.

He is also just one point adrift of his teammate Sainz, who starts the race in P15 tomorrow and will join Ferrari for next season.