Carlos Sainz: I’m not expecting a repeat of Brazil 2019 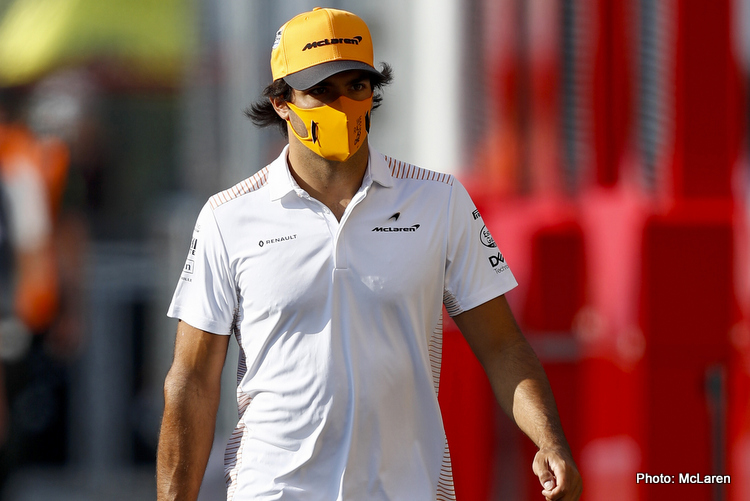 McLaren driver Carlos Sainz is not expecting a repeat of the 2019 Brazilian Grand Prix where he came from the back of the grid to finish on the podium during Sunday’s Bahrain Grand Prix.

The Spaniard went out in Q2 in Bahrain after suffering an issue that left his car beached at turn 3, and he will have to start the race from P15.

Sainz flat-spotted his final set of medium tyres in the process and will face a large strategic challenge if he is to bring his McLaren home inside the points.

Asked whether he could emulate his performance from Interlagos at the Bahrain International Circuit on Sunday, the 26-year-old said his main aim was to finish in the top 10.

“I can already tell you that my options are slim, because of losing that that set of mediums and there are not that many options,” he told his press conference after qualifying.

“But I will try tomorrow and I will give it my best. The team has joked already around the fact that in Brazil we started last after not even completing one lap in qualifying, so at least everyone is in good spirits and wanting to move forward. But I can already tell you that tomorrow the podium is going to be very difficult and we are going to be fighting more to try to get back into the points than getting back into the top five.”

In the battle for third place in the constructor’s championship, McLaren was beaten by main rivals Renault and Racing Point, with Sergio Perez, Daniel Ricciardo and Esteban Ocon starting fifth, sixth and seventh respectively.

“It’s going to be a bit of a damage limitation day and there’s already been done quite a bit of damage with having to start so far back and everyone in front of starting on the mediums,” Sainz added.

“So far this weekend, it’s been good and I’ve been particularly comfortable and happy with the, with the setup and the balance of the car so hopefully, when I wake up tomorrow I’m a bit happier and more encouraged than right now.”