Norris: We’re still in the fight and anything can happen 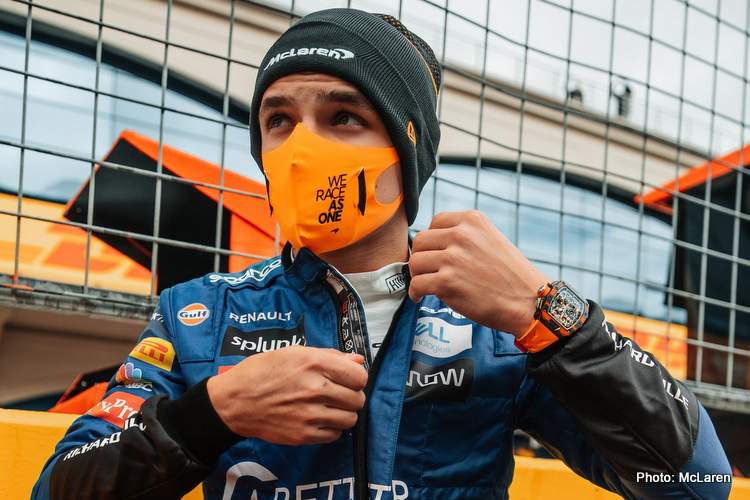 While the 2020 Bahrain Grand Prix will go down as a dead-rubber in terms of the Formula 1 World Championship, it will be a decisive round – as are the following final two – in the battle for third place in the constructors’ championship.

While it may mean little in terms of box-office attraction, third place in the end of the year points standings means a great deal, as far as prize money goes, to the three teams slugging it out for the honour.

While Mercedes wrapped up the title what seems ages ago, their ace driver Lewis Hamilton secured his record-equalling seventh F1 title with a stunning victory in Turkey two weeks ago. Game over at the top.

Red Bull, thanks to Max Verstappen, have all but secured the runner-up slot, however it is the battle for who finishes beneath them which should be tasty to the wire in Abu Dhabi.

Heading to Sakhir. McLaren lie fourth with 149 points, five down on Racing Point whose 20 points haul in Turkey served them well. Renault are fourth, 13 points adrift the Woking outfit while Ferrari need a final three-race renaissance to really get involved in the brawl.

Also, a subplot at McLaren is the fact that Carlos Sainz and Lando Norris are seventh and eighth in the drivers’ standings, the Spaniard on 75 points and the young Briton on 74.

Carlos is sure to want to beat his younger teammate before he departs, at the same time he will be mindful not to burn any bridges before he departs for Ferrari, just in case his Maranello entrance is through a revolving door.

Lando, of course, will be wanting it because he is the guy who will remain with the team, who welcome Daniel Ricciardo to their garage next year.

Ahead of the weekend in Bahrain, Norris said in the team preview, “We’re ending the season just like we started it with one final triple-header. I can’t wait to get back into the rhythm of racing back-to-back again.

“It’s definitely going to be a tough challenge as we haven’t had a triple-header in a while, but we’re going to give it everything. Turkey showed that we’re still in the fight and anything can happen. We just need to make every session count and most of all focus on ourselves.

“The circuit in Bahrain usually makes for some good wheel-to-wheel racing with plenty of chances to overtake, especially with the three DRS zones.

Looking back at last year, Bahrain was one of my best races and it’s where I scored my first points in Formula 1. Hopefully, we can continue to score some important points this weekend and kick off the triple-header strong,” added the 21-year-old.

Teammate Carlos said of the weekend ahead, “Consistency is key for the final three races. We want to score as many points as possible and we will fight until the chequered flag in Abu Dhabi.

“But first we have two rounds in Bahrain, so it’s going to be an intense final triple-header. It’s not an easy task after such a compressed calendar this year, but as a team we’re prepared and ready to go racing.

Bahrain is a track I’ve always enjoyed and I’m looking forward to racing the two-track layouts. Let’s go for it!” added the driver from Madrid.

The venue will host back-to-back races, with the first this weekend to be held at the traditional Grand Prix track layout, with the outer track set to be used the following weekend for the first time.