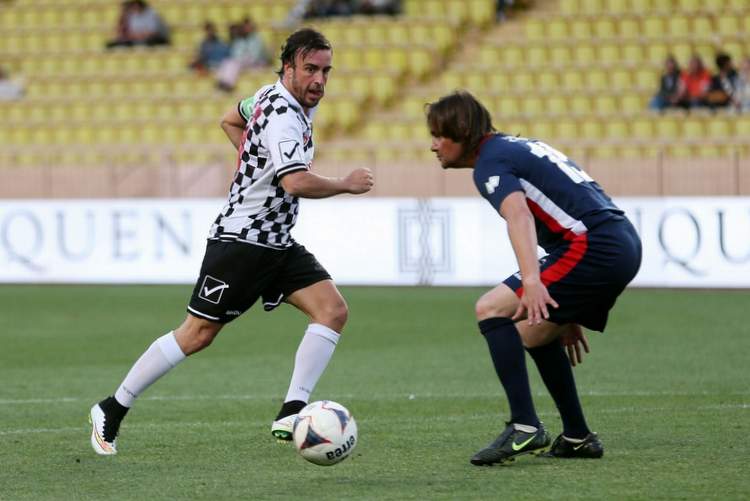 Professional racing drivers simply crave competition and speed, so it makes sense that they are naturally drawn to other sports too.

Few people realise quite how much a team sport F1 is and when many top drivers retire it is one of the things they miss most – that camaraderie and sense of belonging.

Perhaps that is why so many drivers gravitate towards football, either playing in a hobby team themselves or going to matches with friends and family in tow.

Here are some of the F1 drivers who have a real affinity for the beautiful game and all its trappings.

When he is not chasing down Michael Schumacher’s F1 records or gracing the catwalks in Monte Carlo, Paris or New York, Lewis Hamilton is cheering on his beloved Gunners.

He has even boasted in the past of being invited to train with the Arsenal first team by then-manager Arsene Wenger who, thankfully for Arsenal fans, did not go one step further and include the F1 star in his Premier League team sheet. However, the North London club could certainly do with an injection of high-octane pace, with their Premier League odds for this season lengthening by the week.

None of that will stop this dedicated Gunner from flying the flag, though. When he retires expect to see much more of Hamilton at the Emirates in a VIP box.

Rumours continue to swirl about this former world champion and racing legend retiring at the end of the current F1 season. If he does, he will almost certainly be spending lots of time at the Commerzbank-Arena, where his beloved Eintracht Frankfurt strut their Bundesliga stuff.

Vettel has also been known to turn out for charity games, showing that he has a change of pace both on the track and on the pitch as well.

In Formula 1 it always helps if you have a sugar daddy to back your career, and Carlos Sainz Jr is the epitome of that, with his rally driving father bankrolling his son to the top.

When you are part of the Spanish establishment, as Sainz Jr clearly is, there really is only one football team you can support and that is Real Madrid.

Los Blancos are supposedly something of a religion in the Sainz household and Junior is known to be a huge Cristiano Ronaldo fan. It is unclear as to whether he has switched his allegiance to Juventus as a result.

He is the new kid on the F1 bloc and at the age of just 23 has the racing world at his feet.

Away from the tarmac, the Belgian wonder boy is supposedly an ardent PSV Eindhoven supporter, although his loyalties were questioned in 2019 when he was seen in a Champions League crowd cheering on arch rivals Ajax.

Needless to say, the PSV faithful were far from impressed, but with F1 drivers regularly swapping teams in their own sport, it is hardly a surprise that they do the same in football.

F1 is a truly globetrotting sport, with races taking place in all four corners of the world, so it makes sense that one of the most globally minded football clubs attracted the attention of Australian driver, Daniel Ricciardo.

So enamoured with the Red Devils is Ricciardo that he once met with Jose Mourinho and even appeared in an official farewell video for club legend Michael Carrick, declaring the softly spoken midfielder to be one of his best friends. Bless.

No doubt the Renault driver is wishing that the likes of Carrick could return to Old Trafford to pull the red half of Manchester out of the mire.