Hamilton: I dream of going to space and I still may go! 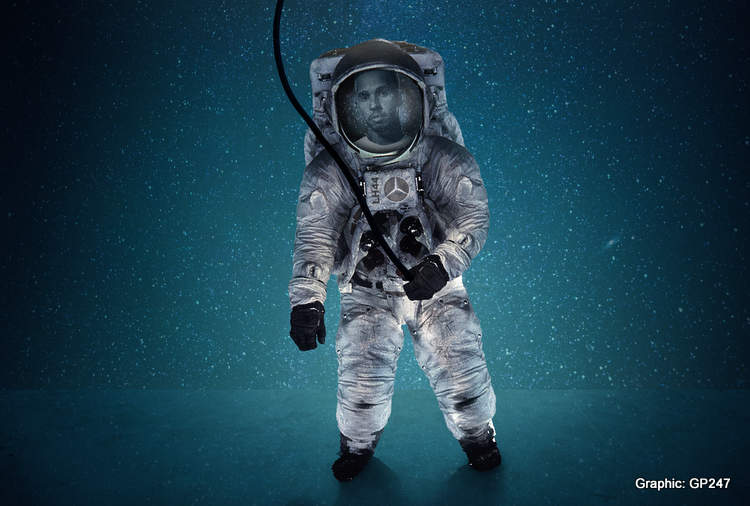 Two decades ago when a very young Lewis Carl Davidson Hamilton dreamt of becoming a Formula 1 World Champion, he also dared dream of breaking the once seemingly unattainable records of Michael Schumacher.

Now, with those boxes ticked, it appears that “to infinity and beyond” might well be the next big project on Lewis’ radar, and he said as much when he opened up in the wake of his big day in Turkey two weeks ago.

Speaking to reporters after claiming his seventh F1 world title and equalling the great Schumi, Lewis said “It wasn’t unimaginable but I think it was seen as impossible. However, I still dreamed of it. I dreamed of going to space, I still may go to space!

“I believe in things. I think when you dream, we all come up with crazy ideas and often think that’s crazy, but there’s something there. It’s our duty as human beings to investigate what that is. Not to neglect it, figure out how hard it is to get there and go for it if you that’s what you really want.”

Lewis can now live his dream, but the journey to F1 was not without its trials and tribulations. His parents, Brenda Larbalestier and Anthony Hamilton believed fervently in their son and with that came sacrifices which Lewis highlighted.

“I know for a lot of people out there, it’s not easy to go after your dreams,” ventured the 35-year-old from Stevenage, “My mum used to love dancing but as soon as she had kids, she stopped dancing. My dad had things he wanted to do, but as soon as he had me that all changed. So I understand that.

“But my dad had a dream of us both being here. We worked together. If one thing drops, something else comes up, there’s always doors.”

While early in his career some felt Lewis was being fast-tracked to F1 and there was a lobby, among the British media, to stall his rise to the top believing the young prodigy needed more time in junior series.

Even when he won the GP2 Series title (equivalent to F2 these days) there were doubters on the Island that he was ready for the top flight.

Lewis recalled, “When I think about 2006, oh man… People may or may not know, I remember the year before my contract was ripped up with McLaren towards the end of the year [2004]. I had to find sponsorship money for the last two. I was pushing to go to GP2 earlier.

“I then came back into contract and we entered GP2 the next year in 2006. I know I was in the F1 circuit, I knew the bosses would be watching, including the most important one, Ron [Dennis]. I put so much pressure on myself.

“Most championships I did, they said we do two years in each – a year of learning and a year to win it. And if you don’t win it by your second year, you’re not good enough. That was always the thinking.

“But I remember that year, in my mind, if I could win this in my first year maybe they’ll give me a chance to be in F1 next year. So I put an unbelievable amount of pressure on myself.”

One could say he came of age at Istanbul in 2006, although he did not win the races in Turkey – he was second in both – he did enough to take the showdown with Nelson Piquet Jr. to the final race weekend at Monza and there Lewis won the GP2 title.

He recollected, “In that race [in Turkey] there were multiple obstacles. I had that spin and I remember that feeling I had, holding the clutch, making sure I didn’t finish, letting go and not hitting car that came by.

“Then not just giving up, and pushing like never before, and coming second. What a moment. It was one of the pivotal moments in my career. People thought: he’s the real deal,” reminisced the seven-time F1 World Champion.

What may differentiate Lewis from his rivals is the work ethic he has in the age of lockdown, he eats, sleeps and breathes F1 as his globe-trotting exploits have been severely curtailed due to the global pandemic.

He explained, “People may think it looks easy, but I tell you man it’s far from it. It has taken a long, long time to be as good as I am. I think I’ve always had the talent.

“I have probably always had the tools, but I’ve been messing around in the toolbox not knowing what to do with those tools. I’ve been fine-tuning them. And I think it’s just focusing on things.

“Every year, I write down where I’m not great, as there are plenty of places I’m not great, and then ask ‘so how do we do that?’ I’m not great at communicating sometimes, so I how can I do that better with Bono and the guys?

“How can I be more positive every time I come to work and be more uplifting rather than drag on people? In the car, how can I better understand all the buttons?

“It’s a lot of studying, I’ve done more this year than I would have done last year. I never understood that when I was younger, I’d just arrive and drive. The amount of homework I do in the background is probably the reason you see the results that I get today.”

Whenever he wins or does well on track, Lewis is always quick to praise his team; the one he joined to a chorus of criticism (again) from the Brit media. He had just ditched McLaren – Britain’s finest at the time under Ron Dennis – to join the enemy, Mercedes a midfield team with Schumacher and Nico Rosberg.

Schumi ended the second (less successful) chapter of his career to make way for Lewis.

By the end of his first year in silver, the Briton’s decision was justified as he finished fourth in the F1 drivers’ championship and with Nico the German team finished second to Red Bull that year, winning three races. McLaren ended the season fifth and were winless that year, and have been so ever since.

Nevertheless, Lewis scored 21 Grand Prix victories for the Woking outfit and while they sank when he departed, Mercedes soared. As a result, Lewis will be hunting his 95th victory in Bahrain this weekend.

All thanks to the incredible team Toto Wolff has built to maximise the massive talents of their star driver which keeps Lewis with his feet firmly on the ground, “I’m humbled by all the people who are behind me. There is a huge workforce behind me.

“I really couldn’t do it weekend-in weekend-out without every single person, whether it’s the cleaning ladies, they are such lovely people, so supportive and on the edge of the seat with me. They are just as important as an aerodynamicist or someone in the carbon shop. Everyone is as important as each other.

“We are all part of this massive chain and if one link is more working, the thing doesn’t work and you see that in other places. We have all these strong links, and I’m really proud of every single person. What we have done, no one else has done.”

However Dad, Anthony is on speed-dial for the Champ, “Naturally, often the first person I call is my dad. In my experience, the mother-son relationship is something so unique, and I’m very close to my mum. Feel like she’s really in my heart.

“With my Dad, he’s always been that rock, the guy I have always wanted to improve for, the guy I wanted to make proud. It has not been an easy job. But I wouldn’t have wanted it any other way as it has made me the person I am.

“He is the guy I wanted to call [after title win], as he is the guy who didn’t give up. That’s something special. I want to be that for all other kids out there, for my kids, for my niece and nephews. I want to be that strength, that guiding light if possible, to help them realise that we should dream big. Don’t restrict yourself, that’s what my Dad always said.”

But in the end, surely helped by the dedication, urgings and sacrifices of family, the Kid with the yellow helmet had to deliver for those dreams to come true. And Lewis did and has not stopped.

“It’s been a self-driven, a self of propelled passion to win a championship,” he mused. “I’ve been a man on a mission and along the way, you have people helping you.

“This year has been so different in the sense that I’m fighting for something much bigger than a seventh world title. Yes, it’s great and it is an amazing thing to see this trophy but what does it all mean?

In retrospect, this season was historic beyond the on-track records, as for the first time F1 drivers – led by Lewis – made a stance with their silent protest before each race to create awareness for the likes of Black Lives Matter.

F1 was treated to the hot-potato that emerges from the oven when politics and sports mix.

“When we talk about diversity, it doesn’t mean we want to swap people out. It’s about making it more diverse and more representative of the outside world. We need to work together to create equal opportunities.

“Every kid should have equal education. It shouldn’t be dependent on your religion or where you live. We have an opportunity and a platform here to raise awareness.

“There are people in high positions who say they don’t want to get involved in politics. Well screw you. It’s not political, it’s a human rights issue. We have to be allies, we have to do it together,” insisted Lewis, whose incredible journey and success has given him the stage to vocalise beliefs that are close to his heart.

Had he and his family not had the hunger and drive, had he not had the genius race-driver gene, had he remained in Stevenage, no doubt his beliefs would be pretty much the same, but the stage to educate and create awareness about the plight of racism would’ve been much smaller.

In the end, Lewis has reaped what he has sowed, and it has been a great crop. Now his next frontier – space – awaits the Champion of the World!