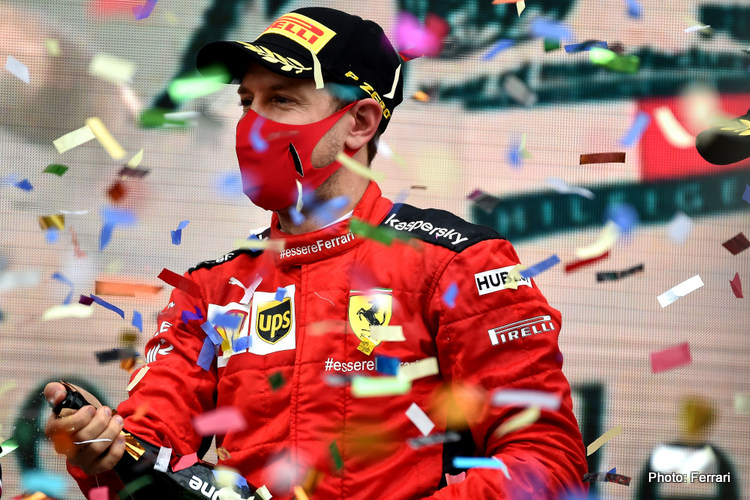 Sebastian Vettel’s podium at the Turkish Grand Prix was a “very important” step forward in what has been a disappointing season so far, says Ferrari boss Mattia Binotto.

Already off to a bad start before racing began with the Scuderia deciding not to renew his contract past 2020, Vettel has been largely a shell of the driver who won four Formula 1 driver’s titles from 2010-13.

However Vettel finally managed a strong result in Istanbul, out-qualifying teammate Charles Leclerc for the first time in 11 races, and nabbing a podium from the Monegasque after the latter came off second-best in a last-lap tussle with Racing Point’s Sergio Perez.

Binotto, who decided not to attend the race in order to focus his efforts on development of the 2021 car, congratulated the German afterwards, while suggesting he had finally found some confidence in his car.

“I’m very pleased for Sebastian,” he said. “I think a podium for him is very important. It has been a difficult season for him.

“I think he has started being, at least now at the end of the season, [more] comfortable with the car. He’s delivering better.

“He had a very good start, very consistent, with good pace. He was managing the tyres, managing to keep the positions, and holding the positions. And overall, even on the last lap, he did well because he took the opportunity. And it’s great for him.

“He just finished third, very close to Perez. But great, I’m happy for him. Still three races, and hopefully we will do as well in the next one.”

For his part, Vettel, who sits 13th in the driver’s standings on 33 points, joked afterwards that Binotto’s absence was the reason for his success.

“I think we scored probably the most points this year for us and Mattia wasn’t here! Yeah, if the next race we don’t score as many points we try again to leave him at home,” he quipped

“No, I don’t think it’s related to that. I don’t believe in this kind of stuff.”