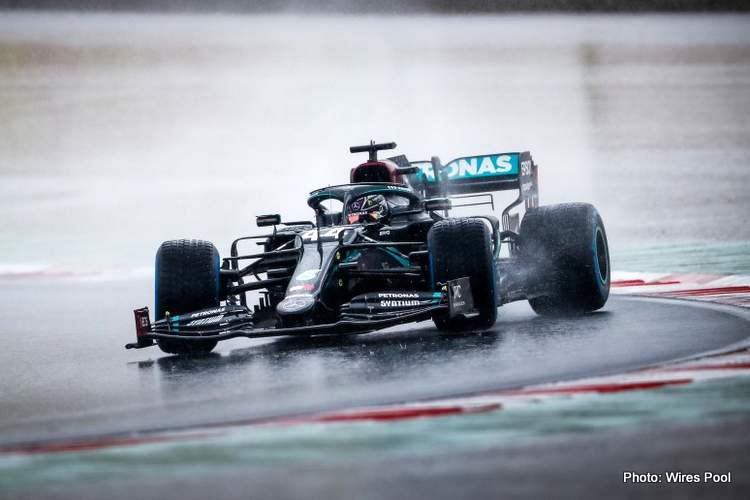 After an exciting weekend at the Turkish Grand Prix, rushed resurfacing of the circuit and many speculations about what might happen, F1 return to Turkey was a blast. There are 3 more long-awaited F1 2020 races at Bahrain Bahrain International Circuit, and Yas Marina Circuit, Abu Dhabi, and the fans are hyped to see how the year ends.

The odds and betting lines for this weekend’s F1 return to Turkey after 8 years weren’t surprising. Lewis Hamilton was an absolute favourite at many sportsbooks, and those who wagered on him to be a winner almost knew that their winnings were secured. However, with an average odds of 1.40, no bettor could hope for huge winnings.

Having in mind the fact that Hamilton won the last 3 Grand Prix consecutively, it wasn’t that hard of a guess that he will win the Turkish Grand Prix as well. Moreover, the Mercedes driver secured his 7th world title and equalled his record to the famous Michael Schumacher’s record. Hamilton, started sixth and won by the incredible 30 seconds, which might seem unimaginable, and this is precisely how new records are set.

The odds for the win were somewhat close to the final outcome, and what all of us expected was definitely the victory of Lewis Hamilton. On the other hand, his close Championship rival, Valtteri Bottas finished 14th despite the 4.50 odds at multiple sportsbooks. Sergio Pérez and Netherland’s driver Max Verstappen made a significant advance, especially Pérez who got his ninth F1 podium at Turkey.

Those who decided to bet on Sebastian Vettel from Germany via real casino apps probably won big, as with the average odds of 300, nobody could tell that he could finish in the first 3.

Here is the list of top ten drivers at the Formula 1 DHL Turkish Grand Prix 2020 race:

The odds for fastest in qualifying over the 13 pole positions of the 2020 season go to Lewis Hamilton and Valtteri Bottas – and all 13 to the Mercedes drivers. In addition, the next on the $3 deposit casino odds list was definitely Max Verstappen with 7.00 odds, before this weekend’s race.

Racers with a bit higher odds were Sergio Perez, Alex Albon, Charles Leclerc and Daniel Ricciardo with an average of 51.0. Moreover, right after them was Pierre Gasly with 67.0 as well as Lance Stroll and Lando Norris with around 100. Esteban Ocon, Carlos Sainz, Daniil Kvyat and Sebastian Vettel had odds ranging from 120 to 300.

The odds underdogs of the Turkish Grand Prix with more than 900 were:

Odd for Hamilton, Bottas and Verstappen were too close prior to the Turkish Grand Prix. Those who betted on either of them could’ve noticed it this weekend as they were 1.14, 1.25 and 1.30. Also, Ricciardo’s F1 podium finish odds were around 3.75, thanks to his success in the last three races. Two more racers deserved 4.50 F1 podium finish odds last weekend, Charles Leclerc, and Sergio Perez.

Also, drivers that were in the middle grounds when it comes to odds could also bring a lucky and experienced bettor some extra cash this weekend. Ranging from 10.0 to 51.0 you could find different F1 names on the podium finish betting list of any top-notch sportsbook operator.

Some of those names are Alex Albon, Pierre Gasly, Carlos Sainz, Esteban Ocon and Sebastian Vettel. Among the most impossible bets were Antonio Giovinazzi, George Russell, Nicholas Latifi, Kevin Magnussen, and Romain Grosjean, with odds around 901.

Seeing the performance of F1 racers at this weekend’s Turkish Grand Prix could help you compare the odds with the actual results. This might help bettors look at their next betting move from a completely different level. Congrats to the incredible Lewis Hamilton on his new record and don’t forget that the F1 2020 betting season is still not over.