Hamilton: You have to be anti-racist 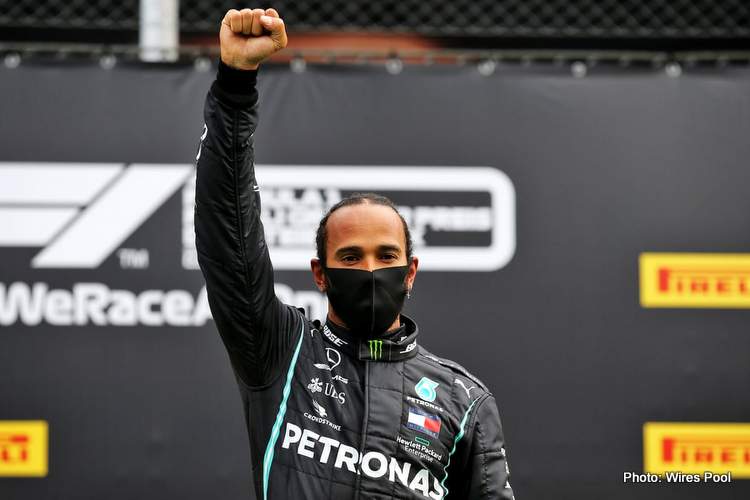 Lewis Hamilton has said becoming the most successful Formula 1 driver of all time means nothing unless he can help tackle racism and push for change.

The Mercedes driver became F1 world champion for the seventh time after sensationally winning the incident-packed Turkish Grand Prix on Sunday, equalling the record previously held by Ferrari great Michael Schumacher. It was also hailed as his greatest drive.

The 35-year-old Briton now has more career wins, pole positions and podiums than the retired German, however, and plans to add to those records.

“Competing and winning championships is a great thing, but what does it really mean? It doesn´t mean anything unless you can help push for change,” he told the Guardian newspaper in an interview published on Tuesday.

The interview was conducted by Michael Eboda, chief executive of Powerful Media, whose annual Powerlist on Tuesday named Hamilton as Britain’s most influential Black person.

He was the only sportsman named in the top 10, which included rapper and philanthropist Stormzy at number three and British Vogue editor-in-chief Edward Enninful fifth, and he was the first to top the list.

Hamilton has used his platform more than ever this year to make his voice heard on subjects from racial injustice to diversity and the environment.

The Briton has set up a commission of experts to help increase the representation of Black people in British motorsports, and routinely takes a knee and promotes Black Lives Matter at races.

“There are some drivers who don’t take the knee, and there are athletes out there that don’t. But they stand alongside their teammates still.

“There are some drivers that I’ve worked with who took the knee initially and they’re like: How long am I supposed to do this for? And it’s an interesting question for them because it obviously shows a lack of understanding.”

“It is very symbolic to continue to utilise that platform and use that message. And it´s important to continue to do it, to keep awareness, because otherwise this thing could die a quiet death and go back to how it was in the past. So I don´t see this changing for some time.”

Hamilton said he wanted to really see a different Formula One in 10 years’ time.

“Yes, we have this Black Lives Matter moment and there’s a mic and people are hearing it, but you´ve got to really do the work to activate change,” he added.

He said he was talking to F1’s commercial rights holders Liberty Media for a long-term role “to try to help them progress in the right direction and continue to bring in new audiences.

“I´ll probably do that as a side job. I honestly couldn´t be more excited about it,” he said.

“On one side, I don´t want the time to ever go by fast. On the other, I can´t wait till I start this new chapter of my life.”