Vettel: Hamilton is the greatest of our era 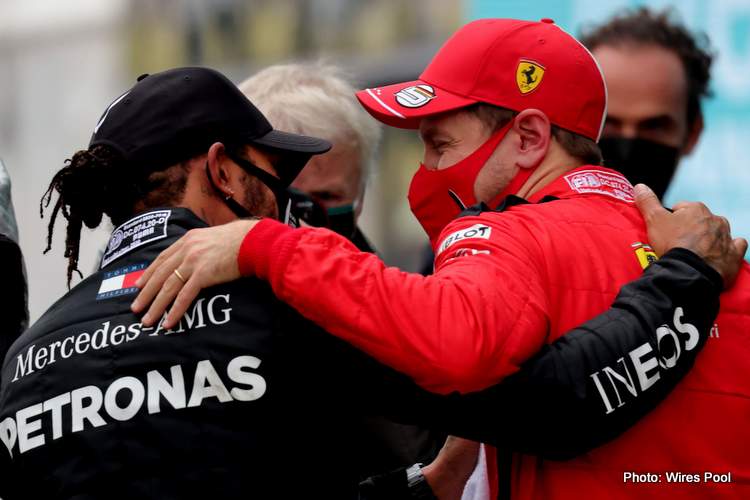 Only Sebastian Vettel and Lewis Hamilton have won Formula 1 titles during the second decade of the 21st century, and it was heartwarming to witness the German rush to congratulate his British rival at the end of an epic 2020 Turkish Grand Prix.

On the day, Lewis matched the remarkable record seven world championship held by legend Michael Schumacher. That Seb was first in line to honour the Champion shows his true colours of sportsmanship and graciousness that makes him special, loved and respected in the sport.

Until 2017, Seb had more titles than Lewis, but then the Mercedes man soared as Ferrari and their Michael Schumacher heir apparent failed to live up to expectations.

On Sunday, after a riveting race in which he finished third, Seb revealed to reporters what he said when, in parc ferme, he leaned into the Merc cockpit and spoke to Lewis, “I told him that it’s very special for us because we can witness history being made today

“I think he is the greatest of our era for sure. I think it’s always difficult to compare, how can you possibly compare Fangio, Stirling Moss to our generation? You can’t.

“Maybe we would be useless because we’d all be shitting ourselves in those cars, maybe they would be useless in our cars because they’re way too fast, who knows? But it doesn’t matter. I think every era has its driver or its drivers, and Lewis is certainly the biggest, greatest of our era.

“To me, certainly emotionally, Michael will always be the greatest driver but there’s no doubt Lewis is the greatest in terms of what he has achieved. He’s equalled the championships, he has more races won, he has a lot more pole positions so I think he’s done everything you can ask for.”

As expected Lewis wrapped up the title in Turkey, but the manner in which he did will forever be etched in history, perhaps even his greatest race.

“I think today’s the best proof. It’s a difficult race, a very difficult race to stay on track and two hours long, and probably if we’re honest, it wasn’t his race to win, and he still won it, so I think once again he managed to pull something special out of that bag, and therefore I think he deserves everything he has achieved,” added Seb, a true Champion. Respect.