Vettel: There are some races that are special 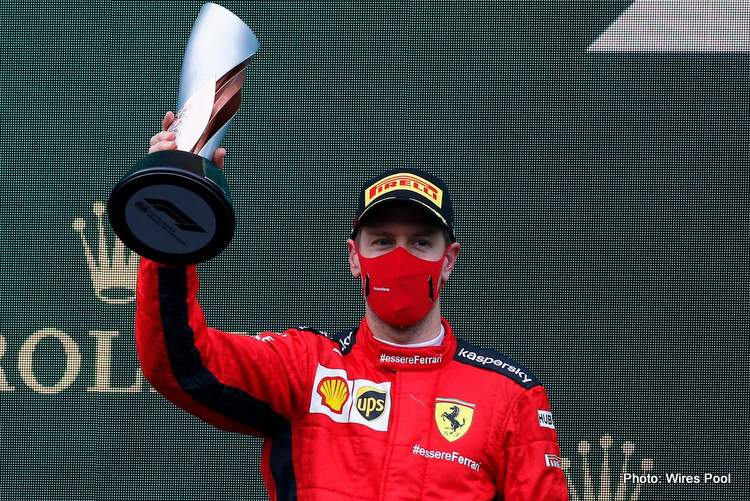 Sebastian Vettel went a long way to vindicating himself at the 2020 Turkish Grand Prix, emerging second at the end of an epic, incident-packed race at Istanbul Park, a special place for the German.

It has been a torrid season for the four-times F1 world champion, but this weekend where the car played less of a role and allowed drivers to shine on Sunday. The Ferrari driver was one of them.

After a stunning first lap, from 11th on the grid to third by the end of the first lap! Seb came through to score a long-overdue and well-deserved podium, with third place which might’ve been second bar a few tenths.

The #5 Ferrari started the final lap in fourth, after he gave teammate Charles Leclerc a free pass to attack the Racing Point of Sergio Perez, the Red pair hunted down the Pink car and Charles made a charge, but fluffed it.

In the aftermath of the three-way tango on ice that ensued, Perez kept his cool to claim second as did Seb sneaking through in third; three veterans denying the young guns a chance of a podium on a day in which experience triumphed.

Seb said afterwards, “There are some races that are special, where anything can happen. I think today’s race confirmed that I have a special relationship with Istanbul Park. One could say my Formula 1 career began here and here again, in what has so far definitely been a difficult season, I have managed to finish on the podium for the first time.

“The first lap was incredible. I got away well and with the heavy wet tyres, I had great grip. Then, when we switched to the intermediates, I struggled a bit more. I think the fact there was less water on the track helped and so, in the closing stages I was really quick. In the last few laps I caught Charles and Perez who were fighting.

“Charles overtook the Racing Point, but locked up at turn 12, so I went inside and I only just missed out on getting second place too,” pointed out Seb, and indeed there were only a couple of tenths between second and third place on the day.

After his second-place evaporated in the spray of Istanbul, Charles was fuming with himself, but his older teammate had a kind word for him, “I am sorry for him and I can understand he is very angry about what happened.

“In many ways, I see myself in him. But he is so strong that very soon, this day will be completely unimportant in his mind. He drove a great race,” insisted Seb whi bagged driver of the day for his efforts.

Ferrari team boss Mattia Binotto, not present in Turkey this weekend, was happy for the man his team will shove out the Maranello door at the end of the season, “It’s particularly pleasing that Sebastian finally got into the top three. He drove a very strong race, especially that fantastic start.”

The folks at Aston Martin will be glad about what they saw when they got a glimpse of the Seb of old in Istanbul on Sunday.