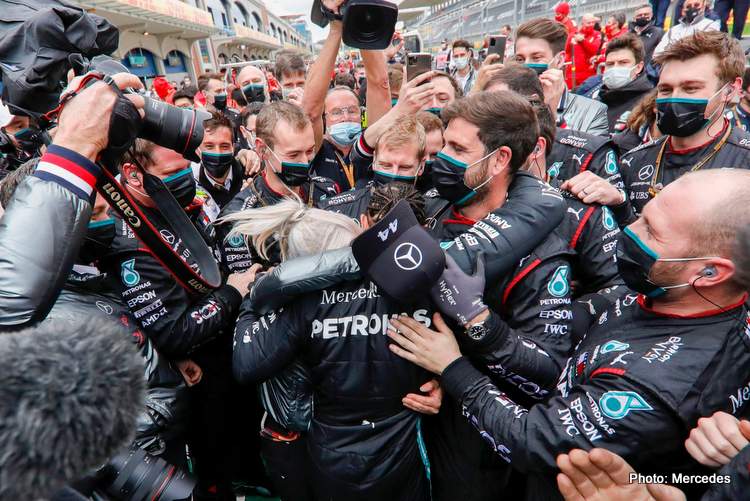 Social media was awash with praise for Lewis Hamilton after he clinched a record-equalling seventh Formula 1 World Drivers’ Championship title by winning the 2020 Turkish Grand Prix – and he did it in style.

On Sunday, Lewis delivered arguably his finest display of the season to claim his 10th win from 14 races and match Michael Schumacher’s all-time title haul with three rounds to spare.

Former world champion Nico Rosberg led the adulation on Twitter, hailing his former rivals’ achievements as “insane” and among the “greatest” in sporting history.

The German, who took the title in 2016, wrote: “7 x World Champion – that’s insane! Massively deserved. Surely one of the greatest achievements in the history of sports. Congratulations Lewis and enjoy the celebrations with your family and friends.”

F1 described Lewis and his joint record holder Schumacher as “legendary drivers”. Meanwhile, the Mercedes team were blown away by the impressive exploits of their star driver.

After tweeting they were “speechless” as Hamilton took the chequered flag in style, they added: “WHAT A WAY TO DO IT, MATE. WHAT A WAY TO WIN YOUR SEVENTH WORLD TITLE!”.

Other members of the motorsport community swiftly offered congratulatory words.

Dario Franchitti, a four-time IndyCar Series champion and three-time Indy 500 winner, saluted the winning performance in Istanbul as a “masterclass”, while Dutch racing driver Giedo Van Der Garde posted a picture of himself on the podium alongside a youthful Hamilton and praised the Briton’s self-belief.

“A masterclass today from @LewisHamilton to win his seventh World championship. So so impressive,” tweeted Franchitti.

Van Der Garde wrote: “Who would’ve thought that kid would go on to win 7 World Championships. I guess you did. Congratulations champ, you wrote history again today. @LewisHamilton”.

Who would’ve thought that kid would go on to win 7 World Championships. I guess you did. Congratulations champ, you wrote history again today. @LewisHamilton pic.twitter.com/xTujMj0QMr

French driver Romain Grosjean, who retired from the race on lap 52, had expected Schumacher’s record to stand the test of time.

He wrote: “Congrats @LewisHamilton Didn’t think Michael record was ever going to be equalize. Very impressive Congrats @MercedesAMGF1 for the incredible work also.”

England’s football team were short but sweet in their praise for the Stevenage-born driver, simply writing: “Congratulations, Lewis!” followed by a clapping emoji.

Former England striker Gary Lineker hailed Hamilton’s display as “stunning”, adding a goat emoji at the end of his tweet.

“Congratulations to @LewisHamilton on equalling Michael Schumacher’s 7 world titles,” wrote Lineker. “What an achievement. Has to be right up there alongside our greatest ever sportspeople. Stunning.”

“Congratulations to Lewis Hamilton a world-beating achievement. The UK should be very proud of his achievements and British Motorsport,” wrote Wallace.

Meanwhile, the man himself dedicated his achievements to his fans, family and friends in a series of tweets.

“7X Formula 1 World Champion. Wow. To everyone that has supported me along the way, this is for you,” posted Lewis.

“To my incredible family, where do I even start? I am eternally grateful for your unconditional love, sacrifices and support to my closest friends that have made this challenging season more bearable by continuously lifting my spirits, thank you, this year would have been so much harder without you.

“To every rival that has pushed me to grow and become better, thank you, I share this with you too…”

7X Formula 1 World Champion. Wow. To everyone that has supported me along the way, this is for you. To my incredible family, where do I even start? I am eternally grateful for your unconditional love, sacrifices and support… https://t.co/Uwb34qzCx2