Perez: Lewis was on another level, second was our best 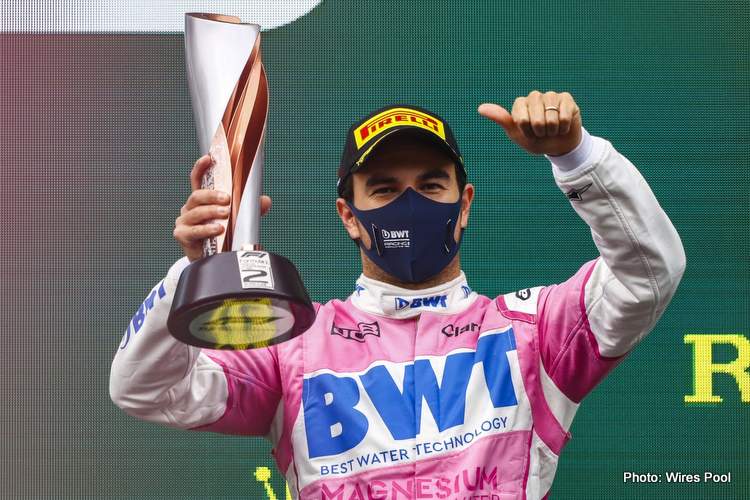 Sergio Perez once again was a standout performer when attrition was at its highest in a Formula 1 race, the Mexican doing wonders with his tyres to wrestle his way to a fine second place at the 2020 Turkish Grand Prix.

Ironically Sergio is out of a job, at the end of the season, as the man he beat to second place at Istanbul Park on Sunday – Sebastian Vettel – will take his place as Racing Point morph into Aston Martin.

That the 30-year-old from Guadalajara may not be on the grid in 2021 is a sporting travesty, as on Sunday he might have won the race had Lewis Hamilton, the winner, not delivered one of his best drives ever to claim a seventh F1 title.

Sergio fended off a double-pronged Ferrari attack on the last lap to finish a well deserved second.

This is what he said afterwards, “I told my team on the radio ‘one more lap on those tyres, I think they will have exploded!’ The vibrations were really bad towards the end.

“But I think it also made our race. Looking after them towards the beginning and towards the end, with drying conditions, I think the team did a fantastic job with the strategy in the race. Lewis today was extremely strong but we managed to get a result.

“I couldn’t see anything on my mirrors as they were full of fog, then I saw Max run wide and he disappeared. Also with Charles, I wasn’t aware he was so close to me. So in the final lap it was a pretty good battle. He overtook me into Turn Nine, then I took him back into 11. A strong result for us.”

“We’ve come close to a podium several times this year, so it’s great to enjoy the moment now with the team. It was an exciting race and a difficult one all the way to the end. The key was managing the intermediates at the beginning and end of the second stint, it made a huge difference.

“Lewis was on another level today and, once he got by me, he controlled the race. So, second was the best we could achieve and we did a great job to keep the Red Bulls and Ferraris behind.

“I had no idea Max was chasing me with all the spray and my mirrors being fogged up: I just saw him run wide and then disappear. There was also a crazy end to the race with Charles!”

As for the frantic final lap, “I made a little mistake into Turn 9 and he got by me, but I was able to cut back in front at Turn 11 and then Seb got through too! We’re all delighted with today’s result and it was a great effort by the team. We’re going to enjoy it tonight!”

Racing Point team principal Otmar Szafnauer added, “A podium is a great result for the team after an excellent drive by Checo. We can be very proud of the fact we led a significant amount of the race in very difficult conditions with both cars.

“As we’ve come to expect with Checo, he managed the wet tyre very well early on and the team timed his switch to intermediates perfectly. To manage the intermediate on a changing track surface for 48 laps was a huge challenge, but he managed it to secure P2.”

“Today’s result is a memorable one that has lifted the team back into P3 in the Constructors’ Championship, which is a real boost going into the final few races of the season,” added Szafnauer.

After a long wait, @SChecoPerez is back on the podium!

The ninth of his career, and the 11th different driver to do it in 2020 🙌#TurkishGP 🇹🇷 #F1 pic.twitter.com/PKdS3PQTfZ