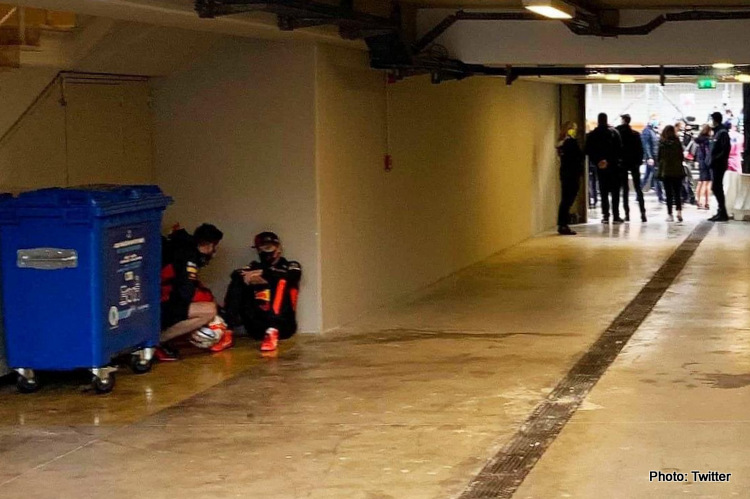 The picture of a gutted Max Verstappen seated in the Istanbul Park paddock tunnel being consoled has gone viral on Twitter, as it aptly shows the anguish of the Red Bull driver after he was pipped to pole position by Lance Stroll on a dramatic afternoon of qualifying for the 2020 Turkish Grand Prix.

The result was hard to stomach for Max because, since Friday, when F1 rolled-out on to the ice-rink-like track, he was simply been in another league. That sparkling form carried over into qualifying where he was easily quickest, by a large margin, every time he unleashed a lap.

There is no doubt that the Dutchman is now “King of the Rain” in this modern era of F1. It is not the first time Max has outdriven his rivals in the wet, and it won’t be the last. But Saturday was not this day as he had to settle for second.

He was properly peeved and said as much immediately afterwards, “In Q1 we tried to go out on the inters, it was faster in Q3, but for us the inters were horrible. The extreme tyres were good for us.

“At the moment I’m just a bit disappointed, of course, there’s still a race tomorrow.”

In the team report later, he added, “When you are first in every session with such a big gap we expected more and it is a hard one to take.  Clearly, the laps behind Kimi didn’t help but also something did not work for us on that tyre which we need to understand.

As people know, I always want the best and always try to do better so it is not a great feeling at this moment but we can’t change it now. This is racing and you can’t always be happy unless you get the maximum out of the conditions.

“There are no points for today and we have good pace, so hopefully we will have a better time tomorrow and show what we can really do around here,” concluded Max.