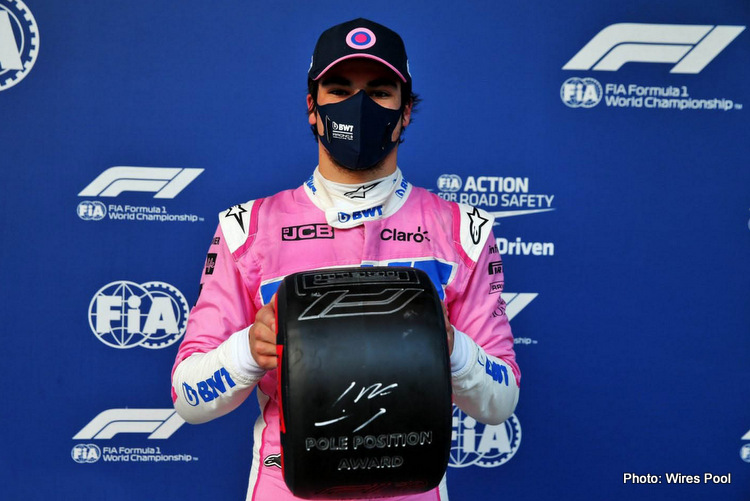 Lance Stroll needed something special to turn his season around, after a wayward spell tinged with a short spell of COVID-19 in which his shares plunged dramatically, and in qualifying for the 2020 Turkish Grand Prix on Saturday he did just that by claiming a sensational pole position in torrid conditions.

The stellar lap came with Lance’s last effort in Q3, on a drying track and Max Verstappen in full might dominating until that point, the pink Racing Point flashed to the top of the timing screens to claim a most unexpected pole position start, his first in F1, against all odds.

Pumping with adrenalin in parc ferme after a top-shelf effort, the Canadian said, “I can’t really put it into words. I’m shocked. I didn’t expect to be up here after FP3.

“There were a lot of things we weren’t sure about coming into qualifying. We didn’t look that competitive in Q3. I’m so happy right now, I put that lap together at the end and I was under a lot of pressure.

“I only had one lap to do I at the end because we started on the wet tyre and then boxed for inters. I had one lap were I got traffic – or Valtteri who spun in front of me – I had one lap at the end and had the confidence in the car. I nailed pretty much every corner and put it together.”

“When I was told over the radio that I had taken pole position, I was thinking: ‘pinch me, I’m dreaming!’. I’m still a little lost for words: I’ve dreamt of days like these and it’s a special moment.

“The conditions out there were incredibly slippery and it was very tricky to drive, but my confidence in the car was just building throughout qualifying and I was piecing it all together.

“Precision, concentration and finding the flow is absolutely key in the wet because it can always be unpredictable from corner to corner on the track. When the car is feeling this good and the tyres are switched on, it’s like a dance and I love driving in those situations.”

On the day, the Pink Mercs (of last year) were better than the latest model and, oddly, neither of the Black cars were in it for the front row by a long shot.

Lance’s biggest threat, apart from an on-fire Max, was his wily teammate Sergio Perez, and he was aware of that, “I knew he was up there at the front. Listening to my engineer, he was giving me feedback about where we were.

“But, in these conditions, you don’t really have time to think about what’s going on around you. It’s really just about the next corner in front of you.

“Once we got on the inters, the car was pretty hooked up for these conditions. To put it on pole is a special moment for me. The highlight of my career,” he declared.

It was a timely turnaround, prior to this his performances were well below, even attracting the wrath of his rivals.

He acknowledged, “Since Mugello, it has been a pretty rough ride for me so it feels good. Feels really good right now.”

After the session, Lance was summoned to the FIA race stewards to answer to what might have been a yellow flag infringement. But they decided no further action was required. 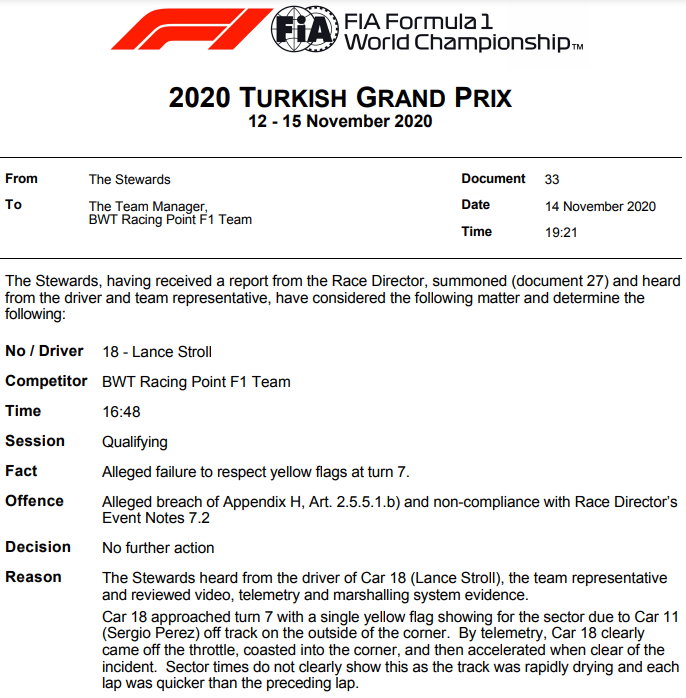