Ferrari endure a long and wet afternoon of misery 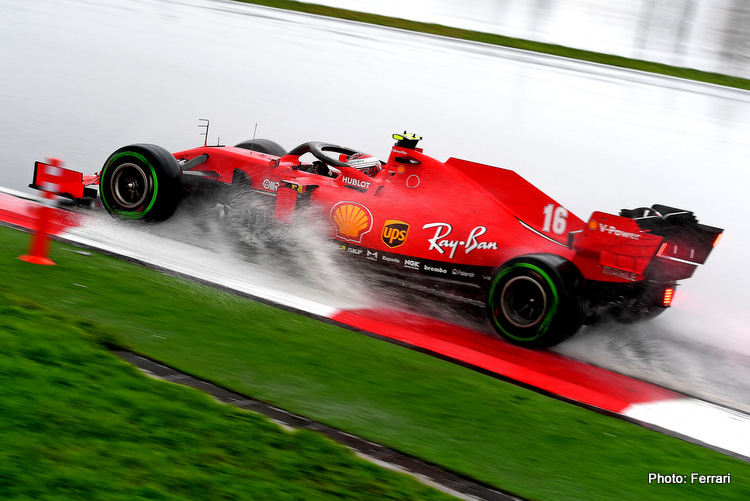 The misery was compounded for Ferrari during qualifying for the 2020 Turkish Grand Prix, the Red car totally out of sorts and comprehensively outperformed by their customer team Alfa Romeo.

Istanbul Park was a slippery playing field, but a great leveller at the same time.

When the spray had settled, the reality was that Ferrari not only have a dreadful power unit, the SF1000 is beyond salvation and making a strong case to become the worst F1 car ever to roll out of Maranello.

It was a rare day too, as their soon to depart veteran Sebastian Vettel got the better of his teammate, Charles Leclerc, in quail for the first time in a while, but neither driver was happy on a day in which they were only good for 12th and 14th respectively. Times are hard and sad for Scuderia and their legion of Tifosi.

Sebastian summed up his day, “We were struggling just to generate heat in the tyres, and in a situation like this I think a couple of degrees makes all the difference.

“Unfortunately we were not able to maximize our potential and I felt the Extreme Wet was our weakest compound. I’m quite sure the car was better than P12, but not in these conditions.

“Tomorrow it will be interesting even starting from the midfield, because the situation with this track surface is something we haven’t seen before, apart from maybe in Austin in 2012, when the asphalt was new.

“Yesterday, in the dry it was very tricky but was also fun. Of course, the race won’t be easy but I think there’s definitely room to improve from our starting position,” added the German.

Charles looked solid on Friday and Saturday morning, but in qualifying he went backwards, even his huge repertoire of skills could do nothing for the lame horse that has forgotten how to prance.

He reported, “The conditions were very difficult for us out there today and unfortunately, our performance was worse than expected, after a reasonably good weekend so far.

“This morning it was raining quite hard but I could feel the grip and I was confident with the car, but this afternoon it was a completely different picture.

“We just could not make the tyres work in quali, we were struggling in the rain and being so far off the pace is really not good. I’m hoping for a dry race tomorrow,” added the Monaco Kid.

Sporting Director, Laurent Mekies had no excuses for the beleaguered team, “This was clearly a very disappointing qualifying. We never managed to get the tyres into the right operating window, apart from our last run in Q1.

“We had already seen from the very first round this year in Austria that we struggle in the wet, but this morning on the intermediates, we were competitive and hoped that would also be the case in qualifying. However, especially on the extreme wets, the drivers were just unable to push.

“Throughout the sessions, we saw big swings in performance, which shows just how difficult it was for everyone to get the tyres working properly.

“It’s a shame, because up until this session, it seemed our package could have been competitive in the midfield, but it will be hard to move up from here. From what we saw yesterday, that will be a big disadvantage.

“But we will do our best, as always, to bring home as many points as possible. It’s going to be a long and uncertain race, partly down to the weather forecast and we will try and make the most of any opportunity,” added Mekies.