Norris: Hamilton should be knighted 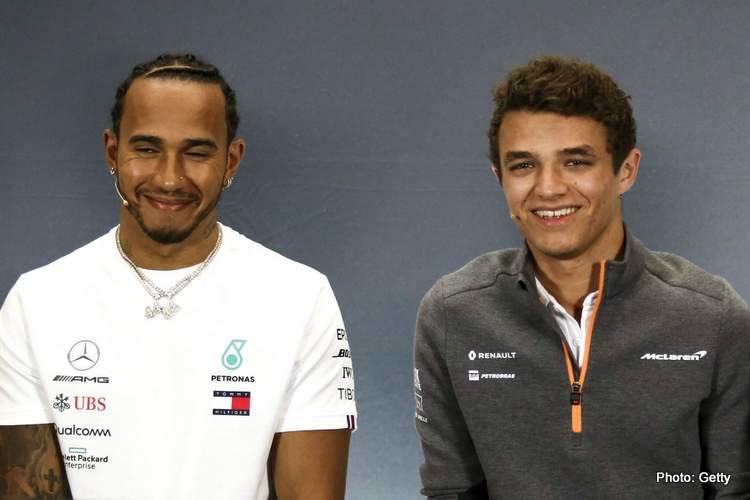 McLaren’s Lando Norris has joined the calls for Lewis Hamilton to be knighted, saying he has done more than enough to earn the title both on- and off-track.

On the verge of a seventh driver’s championship this weekend in Turkey, Hamilton is set to equal the Formula 1 record currently held by Michael Schumacher.

Asked about his compatriot’s achievements, Norris – who caused a minor kerfuffle with remarks about Hamilton a few weeks ago – indicated he could “see no reason” why it shouldn’t happen.

“Only one person in the whole world has achieved what he has done, and that’s Michael Schumacher, so he has led the way in many aspects, on the track but also off the track,” he said.

“A lot of athletes who have done such things in other sports have got knighthoods so I see no reason why he shouldn’t.

“I think it is a good thing for kids who want to get into racing, or who don’t know much about racing, to be inspired by him and obviously try to achieve similar things to what he’s done.”

Still sitting on the MBE he earned in 2008 after his first world title, the prospect of a KBE for Hamilton has long been championed by British peer Lord Hain, who like Norris has championed both his sporting and charitable accomplishments, while highlighting that the honour has been bestowed to other active British sportsmen.

“You have got Andy Murray, Mo Farah, Bradley Wiggins who have all been given knighthoods in recent years, and I cannot understand why Lewis Hamilton hasn’t,” Hain told the Daily Mail in October.

“Frankly, it is unacceptable. He has broken the record for the number of Formula 1 races won, and he will soon be a world champion for a seventh time — records that are unlikely to be surpassed.

“This is a kid from a very deprived background, who is black, and has made it in a rich person’s sport — an incredible achievement. He has been inspirational on the whole question of racism and Black Lives Matter.

“He supports charities and works on climate change.”

One criticism that has often been leveled at Hamilton is his status as a resident of Monaco, from where it is alleged he avoids paying UK taxes. However Hain dismisses this notion as simply untrue.

“On the topic of tax, which is said to be a niggle, Lewis is a top British taxpayer,” he explained. “He has a house in London and I have explained all of this. It’s baffling.”