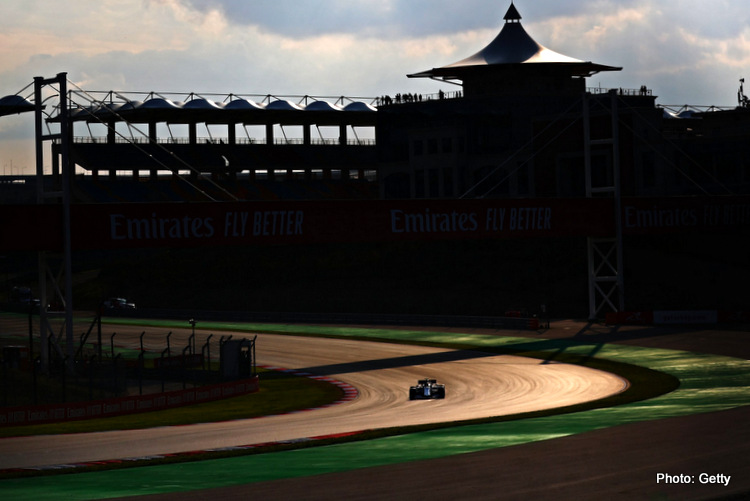 While some Formula 1 drivers claimed they had a good time in the slippery conditions of Istanbul Park’s slippery new tarmac, on day one of the 2020 Turkish Grand Prix weekend, others were not impressed with the lack of grip offered by the newly laid tarmac.

Ahead of the return to Istanbul, all relished the prospect of the fastest F1 cars ever powering around one of Herman Tilke’s finest, although unappreciated and almost neglected racing arenas, the reality was it was like an ice rink out there, literally the blokes were struggling to get to grips with the gripless and super-green track.

Max Verstappen topped the timing screens at the end of the day by four-tenths of a second, Charles Leclerc next best – the pair humbling their respective teammates on the day. In other words, conditions such as these bring out the best from the best, and not so much from the rest.

Not used to being outside the top two, moaner-in-chief was soon-to-be-F1-World-Champ Lewis Hamilton who called the surface “shit” and lamented that ‘they’ messed up a perfectly good track.

The Mercedes number one was not happy when he faced media, “The tyres aren’t working, and you see it. It’s like an ice-rink out there. It’s terrifying the whole way around. It’s almost like there’s wet patches all over… It’s shit with a capital S.”

On the flip-side, Max was satisfied with his timesheet-topping effort, “I think overall for us it was quite a positive day and the car is working well so I’m pretty happy about that. I think the prep we did before we got here was good.”

And then had a cheeky stab at his rivals, “We also did well to react to the conditions out on track.”

Before adding, “It is very slippery out there but at the end of the day it’s the same for everyone so we just have to adapt to it but I think we are all still about five seconds off where we should be on this track.”

Charles Leclerc, second quickest at the end of Friday’s running, was equally upbeat, “At first I was not very convinced by the grip level of the track and thought this was going to be a very bad day, but after a few laps I actually really enjoyed it, as it was a lot of fun to have such low grip. It felt like driving on ice!”

“I don’t know how much track conditions will improve throughout the weekend so it’s good that we’ve done quite a lot of mileage today to understand the conditions and hopefully we can maximize the result,” added the Ferrari driver.

This is what the other F1 drivers had to say on the day F1 returned to Istanbul, after a nine-year hiatus:

Daniil Kvyat: “It’s very particular and grip conditions were very poor today. It’s my first time racing here and the track is quite cool, it’s just a shame about the grip levels.”

Kimi Raikkonen: “The day wasn’t very warm, the tyres were hard and the tarmac new, and this combination made everything really slippery but, in the end, it is the same for everybody.”

Pierre Gasly: “It was a bit of a shock this morning when we found out how slippery the track was, but overall it was a pretty fun day to drive in these conditions. It was very unusual having to drive an F1 car with the grip being so low.”

Sebastian Vettel: “Today was quite unusual, as the asphalt is very new, so it was very slippery. Of course, it did get better towards the end of the day and I guess the improvement will continue over the weekend.”

Romain Grosjean: “It was slippery, that’s about the least we can say. It’s to be expected with the new tarmac. We’ve been struggling with the tires. The track got better, but there’s only one racing line. That’s going to make overtaking and so on quite tricky.”

Kevin Magnussen: “It was very extreme conditions this morning, it was just the lowest grip I’ve ever felt in dry conditions. It was really crazy, but kind of cool as well to have that experience. It was the same for everyone. Some corners, like turn 12, if you lock up a little bit and you miss the apex by a few meters – you’re just driving on ice. You have to be very precise.”

Lance Stroll: “It’s a new asphalt and it’s very fresh, which makes it tricky because the grip level is very low. I wouldn’t expect it to improve significantly over the weekend. All the drivers and teams are in the same boat, so it’s about who can get to grips with the circuit best and I’m looking forward to seeing how it plays out.”

Sergio Perez: “It was very tricky out there today and it’s not just because of the colder temperatures – the lack of grip is a real factor too. When I did the track walk yesterday it was like walking on a marble floor, almost like your kitchen surface at home! It’s very slippery and I think it will be like that all weekend.”

Valtteri Bottas: “When I first went out on track this morning it felt more like rallying, it was quite far away from the normal driving standards that we’re used to in Formula One. But I had fun playing around on track, experimenting with the car, it was actually quite enjoyable.”

Lando Norris: “A tricky day, but quite fun because it was different to normal. The track was very slippery, it’s good fun because it’s hard to drive and you’re constantly oversteering and understeering, but it’s very tricky to put it together and really nail a lap.”

Carlos Sainz: “Not the ideal Friday. The tarmac feels strange at the moment, but that only adds excitement to see who can get it right.”

Antonio Giovinazzi: “The track looks really nice but the conditions were so, so slippery. It was very difficult to put it all together, it was probably the worst I felt in a Formula 1 car today.”

Daniel Ricciardo: “Overall, I would say it was a challenging day for us.  I was not able to feel the grip on such a good circuit, which is a bit frustrating. We found something towards the end of FP2.”

Esteban Ocon: “It was probably the trickiest conditions I’ve ever driven in as it was really slippery out there. I’d probably compare it to what it feels like driving on Intermediates, only that we were on slick tyres.”