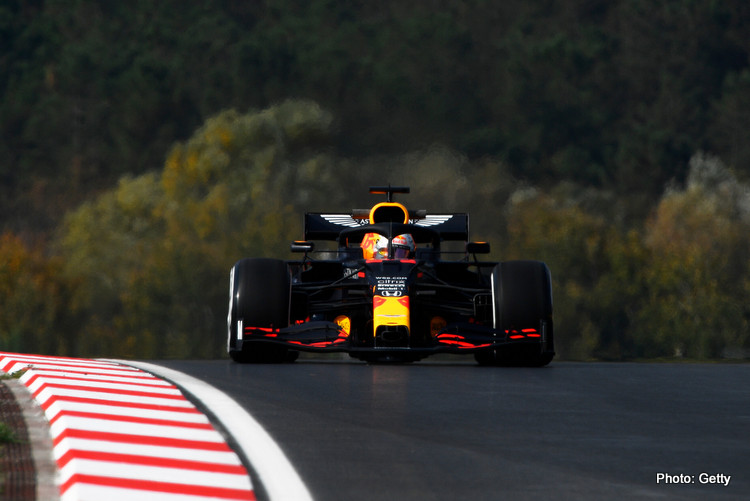 Making its long-awaited return to Istanbul Circuit, the Formula 1 grid found it particularly heavy-sledding in first practice for the Turkish Grand Prix on Friday.

With ambient and track temperatures well below the spring and summer marks enjoyed in previous visits to Turkey, many drivers found their cars heading in unintended directions as the Pirelli tyres simply couldn’t get enough heat in them to provide significant traction.

As a result, even the fastest laps saw drivers tiptoe around the circuit, with the top lap times for this weekend forecast to be in the 1:18s, yet the best anyone could muster here was Max Verstappen’s 1:35.077 – a full 10 seconds down on the last pole-winning time of Sebastian Vettel in 2011.

Behind him was his Red Bull teammate Alexander Albon, 0.241 seconds slower, with Charles Leclerc a further 0.189s back as pre-race favourites Mercedes opted to take it easy.

Pierre Gasly was fourth for AlphaTauri, 0.036s adrift of Leclerc, with Sebastian Vettel a further 0.077s behind his Ferrari teammate.

Daniil Kvyat, Lando Norris and Antonio Giovinazzi finished sixth-through-eighth, with Valtteri Bottas the fastest of the Black Arrows in ninth – something you certainly can’t say often!

Esteban Ocon rounded-out the top ten, although at this point on the timing sheet the gaps were starting to stretch considerably, as he was 3.351 seconds off the lead.

Aptly referring to the circuit and its conditions as “drift city”, Williams’ Nicholas Latifi had both the best remark of the session and a very impressive performance by his standards in finishing 11th, ahead of the Racing Point pairing of Sergio Perez and Lance Stroll in 12th and 13th.

Romain Grosjean was 14th ahead of Lewis Hamilton, the Briton struggling with both the temperatures and his setup in what was a very quiet session for him.

Kimi Raikkonen was 16th ahead of Kevin Magnussen and Daniel Ricciardo, the latter 10 seconds down on Verstappen’s session-leading time.

Carlos Sainz was 19th as a suspected electrical issue curtailed his morning after 11 laps, while George Russell did not set an anywhere-near indicative time in bringing up the rear – although the real disappointment of his session came off-track as it was announced he will be taking a grid-penalty this weekend for exceeding his allocation of power unit components. 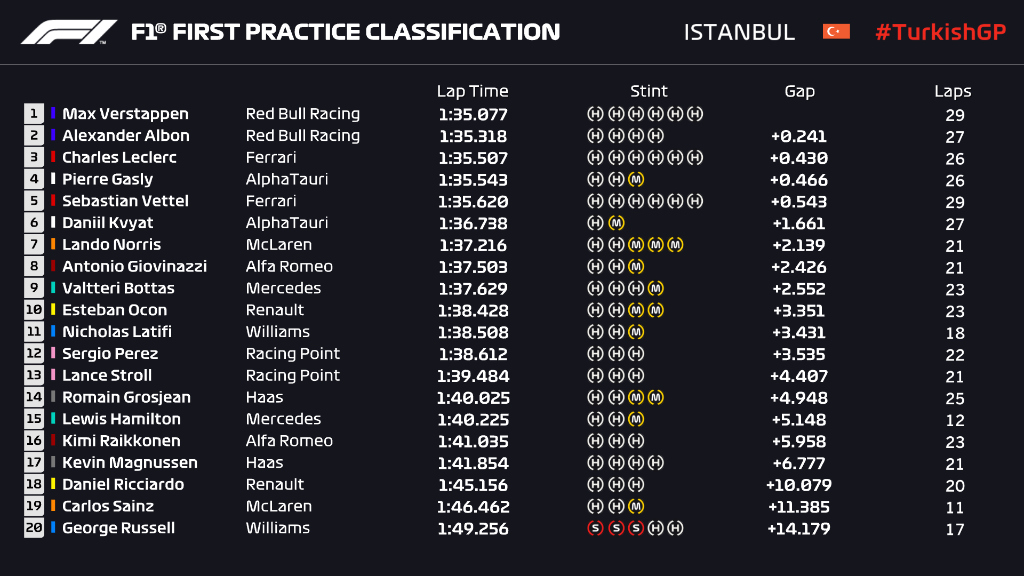