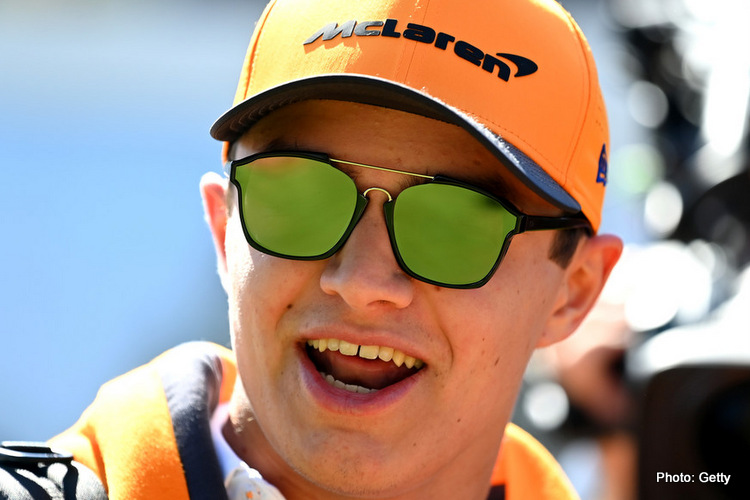 Lando Norris represents the next generation of Formula 1, not only from a race driver only perspective as he also talks for every motor racing fan of his generation, so when he speaks its worth the elders who run the sport to take notice.

In F1’s long-running effort to attract a younger fanbase to the sport, 20-year-old Lando is pure gold for the sport as he is articulate, funny, modest and a superb race driver and, thanks to his circumstances, he is also not shy to speak his mind and with it kick a hornet’s nest or two.

The McLaren driver was in hot water recently for comments about Lewis Hamilton which triggered an (unnecessary) apology from the Young Gun.

Nevertheless, a week on, and credit to Lando for sticking to his guns, not towing the politically correct line and continues to give honest answers to trick questions put to him by media.

In a recent interview with Auto Motor und Sport he clearly does not view the pinnacle of the sport with rose-tinted glasses he is expected to. Journo Andreas Haupt asked how he reacts in the car when he reaches its limit and cannot go any faster, yet his efforts are only good for the sharp end of the mid-pack.

Lan acknowledged, “Sometimes I push and it just can’t be any faster but to win in Formula 1 today, it is not enough to drive fast. Most drivers want to push and concentrate on driving., we don’t want to save tyres. We didn’t have to do that in other series where it’s fun to drive and to watch the racing.

“There are things that the engineers help us with. But they are probably repeating what we are already doing or thinking as drivers. They remind us or help us a little but we are constantly thinking about saving tyres or stepping on the gas.

“We spend hours with the engineers before each race to plan a race. So we have a plan in mind and know what to do, where and when – in which part of the race, in which lap. We already do 99.9 percent of it ourselves.”

In the world where sim racing (with plastic wheel strapped to a desk or pretend cockpit at home) can blur reality, there is a notion that today’s F1 cars are too easy to drive.

But Lando, a keen sim racer, dispelled that notion,  “If they drove a Formula 1 car, they wouldn’t be very good. You shouldn’t lose sight of reality and what is fake. Games are games… and then there is real life.

“There are many things we as drivers would rather not do. We don’t want to be fiddling with switches on a steering wheel all the time and changing settings. We want to drive the car, push it to the limit. But because these cars are so complicated, we need engineers from time to time to instruct us. Because of the hybrid, because of the recovery, we need support.

“But that’s not our fault. The engineers help us but they don’t drive the car. The driver has to do so many things at the same time. I am sure that today’s drivers are as good as the drivers were ten or 20 years ago. F1 cars have become faster and more physically demanding. Some things are more difficult now, other things a lot easier.”

Wise words for one so young who grafts hard on race weekends, in the very competitive and frantic midpack, but at the front, it is highly predictable even boring for F1 die-hards. And has been so for almost a decade.

Lando pointed out, “We have a lot of good races in midfield between Renault, Racing Point, Alpha Tauri and us, the races are great every weekend. Imagine if it were battling like that for the lead, then a lot more people would watch the races.

“Rather than just watching one team win every weekend. Sure [Mercedes] has been doing a much better job than everyone else for years. That’s why they deserve success. On the other hand, this has made F1 boring and the show suffers. If we want to improve things we need these battles, between the four or five cars in midfield, to be racing for victory.”

“If you really want to change racing, you need cars that can follow each other closely. Then races would be much better… and the tyres. You have to admit that there has often been tension in recent years because some drivers ruined their tyres or had to save their tyres but that’s fake racing.

“We want to give 100 percent when race against each other and not be forced to conserve tyres. There are different ways to go racing, what we want is pure racing which allows us to follow closely and maybe lose only a couple of tenths, as opposed to 1.5 seconds like now.”

Lando is one of the most active and popular drivers on social media, his following transcends through all generations with young and old fans enthralled by his prodigious talent, content we have a young star to keep is entertained for the next decade at least.

In only his second year in F1, he has proven to be a match for highly rated Carlos Sainz. His talent unquestioned, while his cool and relaxed demeanour coupled to unscripted gems, such as helping his crew pack the garage at the end of a race weekend, simply endears him more to a growing fanbase.

However, with that massive popularity and exposure come landmines that even the likes of Lewis Hamilton have stepped on more than once. Remember the scolding of a cousin for wearing a fairytale dress? One of several inappropriate high-profile gaffes by the World Champion.

Similarly, Lando is in the spotlight for comments he directed at a wayward Lance Stroll during the heat of battle, and also, later, comments about Hamilton which caused waves, mainly from the Champ’s substantial clan of fanboys.

Asked about the incidents and subsequent ‘apology’, Lando said, “I want to be a nice person and do the right things. But like everyone, I get angry at times. The radio message [Stroll] expressed my emotions at the moment, I want to do well for the team and get points and then someone ruins it. Of course, you boil.

“I do understand people’s frustration about this reaction but that’s just me being annoyed. I am sure that every person gets mad at others in certain situations. Just because I’m on TV, people judge me. They act as if they never say things like that and portray themselves as perfect people. Everyone knows this is a lie.

“Maybe some drivers are heroes in F1, but I’m just a normal guy.”

“It was similar [with Lewis] I said something that was in no way derogatory. I didn’t hurt anyone, it was just my opinion. But sometimes you don’t think about how the people out there will handle it. I get angry sometimes, but I never mean to hurt someone. I want to be a nice guy but sometimes people want to see the opposite.

In this generation of F1, if 35-year-old Lewis Hamilton represents the legendary Old Guard, then Lando Norris (15 years his junior) is part of the very exciting New Guard – up there with the likes of Max Verstappen and Charles Leclerc. The Englishman’s name will be on our collective radar for many years to come.

So what of a showdown: Norris versus Hamilton in the same car?

“I can’t answer that until the time comes,” admitted Norris. “I’m sure everyone on the grid wants the exact same thing. Everyone knows Lewis is probably one of the best drivers in history.

“Everyone is jealous of their position [at Mercedes] and the number of races they win. I want to be in that position too. Some would say: of course I’ll beat Lewis but I’m not hyper-confident enough to say that,” added Lando.