In The Pitlane: Mr Dietrich Mateschitz will decide 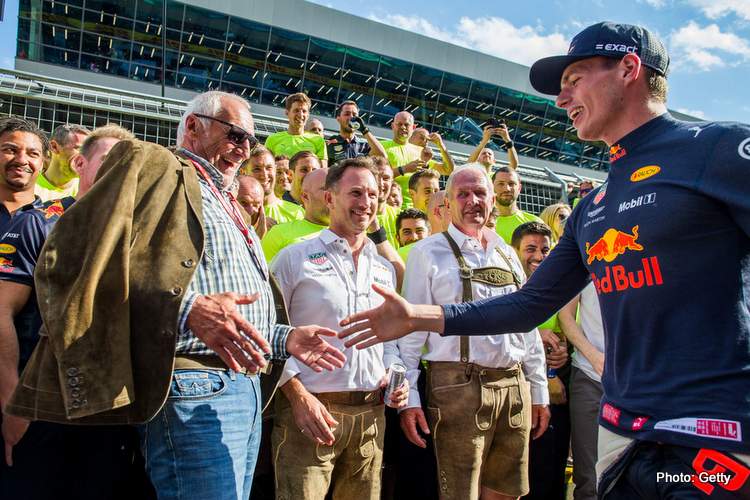 Dr Helmet Marko and Christian Horner are always quoted as saying Red Bull owner Dietrich Mateschitz will make the final decisions on all important issues regarding the teams.

So, the first item in the 76-year-old billionaire’s in-tray is Honda’s departure from Formula1.

Red Bull have stated their preferred option would be to take over Honda’s engine from 2022 onwards, but the rules would have to be frozen to make it affordable.

Horner told Sky Sports “The more we look, there really only is one option that works. “And that would be to try and agree on something with Honda where we could take on the IP [intellectual property] for the Honda engine, but of course that would have to be dependent on the regulations.

Step forward Renault and Ferrari who have expressed their opposition to a freeze of Formula 1’s engine regulations from 2022 with Renaults Abiieboul saying, “I am against freezing the engines. We have no intention to stop what could be a very important platform for us. We do not accept it,”

This will annoy Mateschitz as this leaves him with the prospect of writing a very large cheque to continue with Honda engines.

Next in the in-tray is the problem with Verstappen, that’s Jos, not Max. Father is no doubt inciting Mateschitz with his ongoing comments.

First, we had Jos wading in when he told De Telegraaf that it is “high time that Red Bull delivered a car his lad can go to war amid the sudden uncertain future, “A lot has been said by a lot of people outside of Red Bull but that has no value to us. It’s time for Red Bull to produce a championship-winning car.”

Then he plunged in on the driver debate says that if he was running Red Bull, Nico Hulkenberg would replace Alex Albon and become his son Max’s teammate in 2021.

Telling Mateschitz he needs to produce a championship-winning car and which driver to employ is exactly the kind of interference that is bound to raise his blood pressure.

Mateschitz faces the possibility Max may jump ship, the prospect of this becomes more of a reality if Lewis decides his time in F1 is up, something he has ruminated on recently and Max gets the prized Mercedes seat.
Mateschitz must know if Lewis shocks F1 and hangs up his helmet after winning his seventh title aka Nico Rosberg style then Max is gone breaking his contract in the process.

It is not any less of a headache for Mateschitz when it comes to Albon, both Marko and Horner have been uncharacteristically supportive of Albon with Marko telling German-language motorsport-total.com. “We’ll give him some more time.

“Albon has until the last race in Abu Dhabi to prove himself and then we will make an internal decision about whether he can stay or whether we are looking for someone from outside.”

This has left the paddock confused but it may well be Mateschitz is in a private battle of wills with his long-term Red Bull Thai business partner Chaleo Yoovidhya who is most likely backing British born Thai driver Albon.

Is Yoovidhya playing hardball with Mateschitz adding to his stress levels?

Next in the in-tray is “H.R.” issues with Marko failing to complete his ‘working as a team member’ course.

He must have got under Horner’s skin after the Honda announcement when he told Speedweek, “We work in all directions because we knew about Honda’s decision for a long time. “Mr Horner is a team principal, but not involved in strategic matters. Mr. Mateschitz and I have known for a long time.”

He has also undermined Horner when he contradicted him over whether there was a performance clause in Verstappen contract, Horner says no, Marko says yes!

Then there is the looming threat that design guru Adrian Newey will jump ship and head to Aston Martin leaving Mateschitz with another headache.

So, with the loss of his engine supplier, the risk of losing his star driver, and aggro from all corners no doubt he will with his $26.9bn fortune decamp to his private Fiji Island complete with its $1.7m submarine to ponder his next move.

Part of the decision-making process will be does the Red Bull team give him enough bang for his bucks or has the sponsorship runs its course.

The Red Bull chequebook comes out to host a myriad of events from the cliff diving to the soapbox races so Red Bull is not short of opportunities to spend the marketing dollar on.

So, has Mateschitz had enough, and will he decide to sell?

Mateschitz knows a thing or two about making a deal and will realise to obtain a premium price for Red Bull he has to hold back on selling the Scuderia Alpha Tauri team at the same time so the sale is not perceived as a fire sale.

The suiter with the deepest pockets and probably the greatest desire is Saudi Arabia’s sovereign wealth fund.

The Crown Prince Mohammed bin Salman has big F1 ambitions witnessed by their global sponsorship of F1 through state-owned oil giant Saudi Aramco and the arrival of the Saudi Arabia grand prix for the first time next year with a night race on the streets of the country’s second city Jeddah.

The icing on the cake would be the formation of the Saudi Aramco F1 team.

With the sale complete the Red Bull driver academy would be wound up and Marko will in a role reversal be on the receiving end of bad news regarding his employment with Mateschitz no doubt assuring him, “it’s nothing personal its business.”

Next week: Alpha Tauri the road ahead.