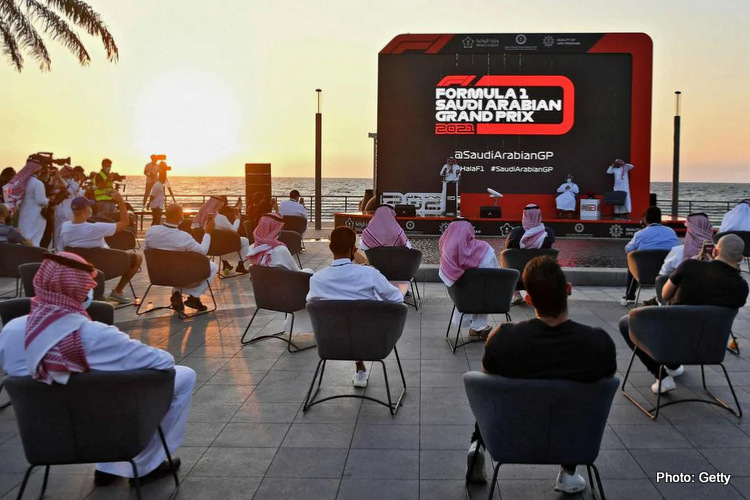 Saudi Arabia will host a Grand Prix next year, a move aimed at attracting well-heeled globe-trotting visitors and raising the kingdom’s profile internationally as a tourist destination.

We reported that Amnesty International has claimed that 13 women’s rights defenders are currently on trial in Saudi Arabia, accused of promoting women’s rights and calling for the end of the male guardianship system, where every woman must have a male who has the authority to make a number of decisions on her behalf.

Ahead of the last race in Italy, six-time world champion Hamilton wore a T-shirt with the message: “Women’s rights are human rights.”

Amnesty International UK’s head of campaigns Felix Jakens said: “If the sport’s most high-profile driver is willing to speak out and say, ‘Actually this is a country that has an appalling human rights record’, then that takes the sheen off Saudi Arabia’s ability to sportswash its image.

Mercedes’s six times Formula 1 champion Lewis Hamilton, an outspoken campaigner for equality and racial justice, said last week he needed to find out more about the Saudi situation but the sport was “a powerful platform to initiate change”.

Prince Khalid bin Sultan Al Faisal, president of the Saudi Automobile and Motorcycle Federation, hailed the race, to be held in Jeddah, as ground-breaking.

“I firmly believe the Saudi Arabian Grand Prix will be the biggest sports event hosted in our country’s history and has the potential to change lives, perceptions and reach new audiences and communities like never before,” he said.

The November night race – along Jeddah’s corniche facing the Red Sea – will be the third in the Middle East with Bahrain and Abu Dhabi, subject to confirmation of a 2021 calendar that has yet to be published.