Tsunoda: That was a good step for me 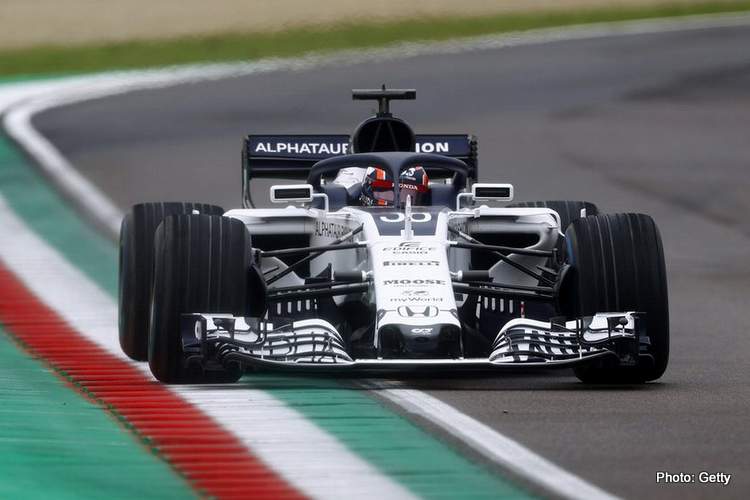 Many believe that Red Bull junior driver Yuki Tsunoda will be the next Japanese driver on the Formula 1 grid and took another step towards that dream with a test for AlphaTauri at Imola on Wednesday.

Using the 2018 Toro Rosso STR13 with #38, Tsunoda spent the morning testing in damp conditions before the track dried out in the afternoon, whereupon he was able to do race-simulation runs as well as hot laps.

Tsunoda did more than 300km on track, which counted towards his FIA superlicence and will be looking for a top-five finish in this year’s Formula 2 Championship, where he currently lies third, to seal the deal and qualify to race in the top flight.

The 21-year-old reported after his big day, “It was easier for the driving but also tougher physically. I expected it to be a little bit less hard physically, especially on the neck. Because driving in Formula 2, I don’t feel much on my neck, and my neck is pretty strong.

“After I drove the car today, I felt it pretty hard, especially in the braking zone and the braking performance. The braking power is more than I expected. I need a lot of training until maybe the next session and next event to drive a Formula 1 car and prepare.”

“After I put the throttle, I initially feel the big power from the engine which I don’t feel much in Formula 2. I think that power is more than I expected, and that was, even in the rain, it was really, really big performance for the initial struggle.

“Even in rainy conditions, I think it was more [performance] than I felt in Formula 2 dry conditions. That was the biggest surprise for today.”

“The experience from practising in the simulator in Red Bull helped me a lot to get used to it really quickly, and the end of the session was really consistently fast.

“Even in race sim, the lap times were really consistent, even while I’m doing lots of things on the steering every lap, almost every single corner. That was a good step for me,” added Tsunoda whose next step will be an FP1 session this season.

Consensus is that Red Bull will slot Tsunoda in at AlphaTauri next year in place of Daniil Kvyat and alongside already confirmed for 2021 Pierre Gasly.

💬 “Today’s session, my first time in a F1 car, was great fun. A whole different world to the F2 car especially in terms of the increased power and the braking performance… I just focused on getting used to the F1 car and completing the 300 kms…”@yukitsunoda07 Full Quote 👇