The Day After: Magnificent Seven 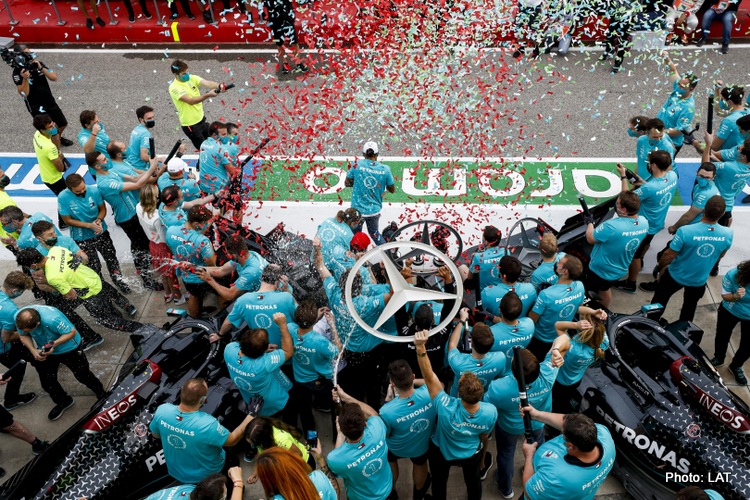 Not that there was much doubt, but with their seventh-straight Formula 1 constructor’s title, Mercedes confirmed they are one of the greatest dynasties in sporting history at Imola on Sunday.

In last week’s Day After, I wrote about how Lewis Hamilton has to be ranked among the 21st century sporting greats, and gave a list of names he has to be placed amongst. However when it comes to the team – and expanding to include any era – it’s much harder to compile a list of equals.

Sure, there’s plenty of teams that did a lot of winning (and for much longer), but to simply not lose as Mercedes have is an almost an impossible feat. I could find only two teams as worthy as the Black Arrows: the Boston Celtics of 1959-66, who won eight-straight NBA titles, and the West Indies cricket team of 1980-1995, which did not lose a test match for 15 years. That’s a pretty short list.

So to Toto Wolff, Lewis Hamilton, Valtteri Bottas, Aldo Costa, James Allison (Paddy Lowe before him), Andy Cowell, Andrew Shovlin, James Vowles, and the rest of the men and women who make up the factories at Brackley and Brixworth, all I can say is: bloody well done.

The above said, you have to feel a little bad for Valtteri Bottas, who probably would have won the race had he not collected Sebastian Vettel’s front-wing endplate on lap two. On the positive side, (and at the risk of overusing a joke that’s been everywhere on social media), it’s as close to the lead as Vettel has gotten all season.

I know the Brits have a bit of an up-and-down relationship with Lewis Hamilton, but after he asked Daniel Ricciardo for a shoey, I think I speak for all Australians when I say we would be happy to take him.

Amid all the hullabaloo about Perez, Hulkenberg and Albon, an interesting subplot is what happens to Daniil Kvyat. Should Albon get demoted or, if Yuki Tsunoda is promoted, he’d be out of a race seat, and I think Sunday showed he is, if not Red Bull material, at least F1-quality.

Would’ve had a podium from 11th on the grid had Racing Point not pitted him under the safety car. Another quality drive from a quality driver.

Worst of the Day: George Russell

Sorry, George. You bin it under the safety car, you get this ‘award’ automatically.