Shovlin: We weren’t believing the sensors on Bottas’ car 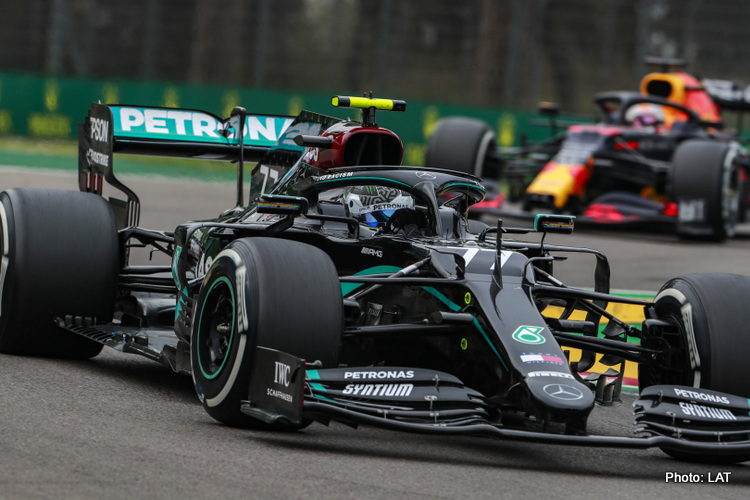 Mercedes’ trackside engineering director Andrew Shovlin has admitted his team was slow to recognise the cause of the damage to Valtteri Bottas’ car in the Emilia Romagna Grand Prix.

An incident that cost pole-sitter Bottas a likely victory, the Finn ran-over a large chunk of a front-wing endplate from Sebastian Vettel’s Ferrari on lap two, causing significant damage to his Mercedes’ bodywork.

And while the Finn was able to hold-off Red Bull’s Max Verstappen for second on an afternoon that saw the team crowned Formula 1 constructor’s champions for a seventh-straight time, Shovlin suggests he had a significant handicap in doing so.

“We were seeing a big drop in performance but the issue is the scale of the drop in terms of laptime,” he explained. “If you translate it to laptime it was seven or eight tenths of a second.

“We weren’t really believing the sensors because we were looking at how Valtteri was not pushing particularly hard, able to do reasonable lap times, and when we needed him to he could build a bit of a gap.

“It’s very difficult to put an absolute laptime loss on these [sorts of issues] because they can often affect the car in a quite non-linear way around the circuit or different behaviour in different directions of corners.

“But early on we couldn’t quite believe how big it was.”

“When you look at the size of the bit and the fact that it is red, you can’t believe that we couldn’t see it on the cameras,” he said.

“But it was lodged in where it was the black area that was visible and because the whole car’s black there, we couldn’t see that.

“If we had been able to see where it was, we could have possibly done a more effective job of getting it out at the first stop.

“But it’s unlucky for him and he definitely made the right decision to go straight over it because taking that onto a tyre would very likely have caused an instant puncture so that was a good call.

“Through no fault of his own it basically held him back for the whole afternoon.”