Perez: We had the podium in our pocket 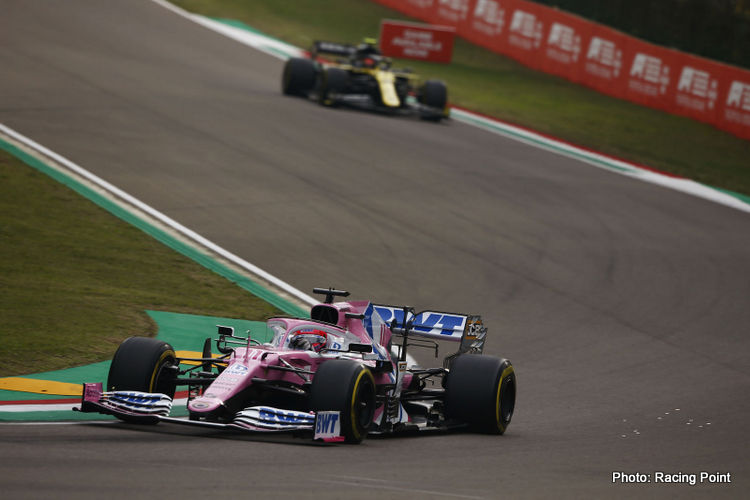 Racing Point’s Sergio Perez has lamented a missed podium in Sunday’s Emilia Romagna Grand Prix, suggesting the team erred in its decision to pit under the safety car.

Running in third from a P11 start when Max Verstappen’s stranded Red Bull brought out the safety car on lap 51, Perez’s team opted to pit him from for fresh soft tyres as a precautionary measure, but the plan backfired with the Mexican ultimately finishing sixth while the Renault of midfield rival Daniel Ricciardo took P3.

Afterwards, both Perez and team principal Otmar Szafnauer admitted the team had made a mistake.

“It was clear that today we had the podium in our pocket and I’m disappointed we missed out,” Perez said. “It’s easy to be critical with the benefit of hindsight, but ultimately we should have tried staying out and keeping track position. However, I don’t want to be critical of my team; the important thing is that we learn the lesson for next time.”

“We chose to pit because we were concerned it would be difficult to switch on the hard tyres after the safety car,” Szafnauer explained. “Those cars behind could do the opposite and were able to stay out on their very old tyres, gaining track position. Unfortunately, George Russell’s crash resulted in an extended safety car and gave Sergio even less laps to use his tyre advantage. In the end, he had to settle for sixth place.”

As a result, Racing Point have been demoted from third in the constructor’s championship to fifth, albeit equal with fourth-placed McLaren on 134 points and just one point behind third-placed Renault.

Nevertheless, with four races remaining in the 2020 Formula 1 season, Perez believes Sunday’s performance is a sign better things are yet to come.

“We still put in a great performance to go from P11 and into P6 to score some really strong points. It was clear in the race that it was very tough to overtake and we still managed to improve with a tremendous first stint on the medium tyres – and it was a good decision to pit when we did [on lap 27] to gain three places.

“It was very close to being the perfect race for us today. We will keep pushing and we’re looking forward to returning to Turkey next time out.”