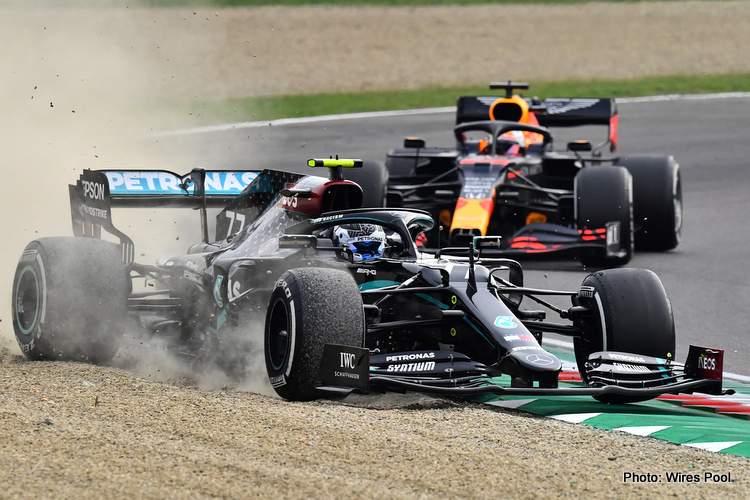 Mika Hakkinen hails Mercedes after their triumphant one-two at the 2020 Emilia Romagna Grand Prix, with it becoming the only team in history to win seven consecutive Formula 1 World Championship titles in a row but laments the fact that only Red Bull’s Max Verstappen is offering any resistance.

The era of dominance we are now in unprecedented, with both the mega-team and their superstar driver setting new records with every outing. This is what double F1 World Champion Mika had to say in his latest Unibet column:

Seven consecutive World Championship titles for the Mercedes Benz Formula 1 team is a truly brilliant achievement, Lewis Hamilton and Valtteri Bottas giving them another 1-2 finish on Sunday after race in which luck – both good and bad – played its part in the outcome.

Lewis’ 93rd race win was also Mercedes’ 100th victory during the hybrid-engine era which started in 2014, and that tells you everything about the level of dominance that the team has achieved under the leadership of Toto Wolff.

Valtteri had once again produced a strong qualifying, edging out Lewis by one-tenth of a second, so another Mercedes victory seemed certain. After making a perfect start to lead the race, however, Valtteri’s day was immediately compromised by picking up a large piece of debris on lap two – part of the front wing on Sebastian Vettel’s Ferrari, damaged following a small collision with Kevin Magnussen.

The drop in performance caused by having a large piece of debris caught in the left-hand barge board of his car cost Valtteri over 0.5s per lap. The aerodynamics of an F1 car are very sensitive to any imbalance, so this was a really major problem and Valtteri did a fantastic job to keep pushing as hard as he did.

We saw him lock the front wheels on his car at the downhill Rivazza corner a couple of times, and this is easy to do when you have not enough aerodynamic downforce to ensure you have grip under braking. Ultimately this is why Max Verstappen was able to overtake him, but Valtteri did a really good job to keeping pushing hard.

It’s clear that Valtteri had an opportunity to win this race, but the bad luck in picking up debris was matched by Lewis’ good luck in having a Virtual Safety Car provide him with perfect timing for his pit stop.

The difference in time between a normal pit stop and a pit stop under safety car conditions was 10 seconds, so this handed Lewis a really huge opportunity – and he took it. He had been pushing hard in 3rd place, realising that Valtteri and Max were running at a slower pace, but the VSC gave him a perfect opportunity to take the win.

As we have seen all year, Max’s Red Bull is the only competitor Mercedes face, and again he did a really good job. Max overtook Lewis at the start, put the maximum pressure on Valtteri and eventually overtook him only to have a right rear tyre puncture throw his car off the track and into retirement.

Max’s loss benefitted Daniel Ricciardo and for the second time in three races it was good to see the talented Australian on the podium. Building momentum is so important in sport, and we can see that Renault and Daniel have made really good progress this season, thanks in part to the arrival of my former McLaren colleague Pat Fry – who was my teammate David’s Coulthard’s race engineer. Fernando Alonso will be watching these results very carefully because if he is given a car capable of podium finishes it will add a lot to the excitement of Formula 1 next season.

A word about Pierre Gasly, the star performer for Alpha Tauri, qualifying fourth only to retire early in the race. Pierre’s driven superbly this year, and to line up on the grid beside Max was a fantastic performance. I know he was hoping for a really strong race, and perhaps another podium to add to his victory in the Italian Grand Prix, so naturally he was very disappointed.

I noticed that Pierre wore an Ayrton Senna tribute helmet, and that tells you a lot about his passion for the sport, and the effect that the death of my former teammate back in 1994 continues to have on the world of Formula 1.

Pierre was born two years after Ayrton and Roland Ratzenberger’s fatal accidents, but this new generation of F1 driver has a big awareness of our sport’s history. Every time they step into their cars, they know that safety is so much better thanks to constant improvements that have been introduced by the FIA over the last 26 years.

Although Pierre retired, it was impressive to see teammate Daniil Kvyat take fourh place after a really strong drive for the Russian driver. He had qualified eighth – still a very good result for his team, although overshadowed by Pierre’s P4 – and it’s interesting to see the Honda-powered Alpha Tauri team make so much progress this year. They are doing a really good job.

It was good to see Formula 1 return to Imola after a 14-year break, and again we are seeing that during the Covid crisis the sport has been able to switch to some great circuits across Europe. The San Marino Grand Prix in Imola was part of the race schedule throughout my career, but although I never had much luck there – no Finnish driver has ever won a Grand Prix in Italy! – I think it is important these circuits are maintained for Formula 1’s future.

I scored my first World Championship points in Imola in 1991, and although I would rather forget the podium finish that I had on that dark day of May 1st, 1994, hopefully Formula 1 will continue to examine opportunities to give the current drivers fresh opportunities to race on these circuits.

Finally, only one driver in Formula 1 today took part in the last San Marino Grand Prix in 2006, Kimi Raikkonen finishing fifth on that occasion. He did a really good job on Sunday to complete 48 laps on his first stint on medium tyres and finish the race in ninth place. With his contract with Alfa Romeo renewed for 2021, Kimi continues to make a great contribution to our sport. Well done to him!