Hamilton: I think of the unsung heroes of our team 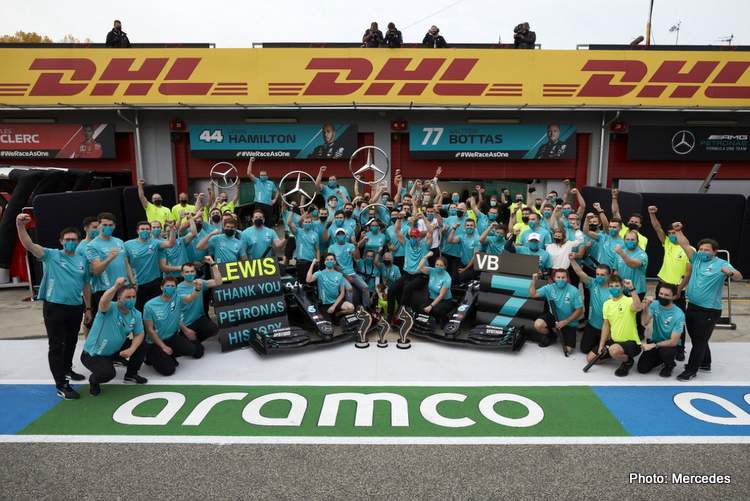 On an afternoon belonged to Mercedes, their superstar driver Lewis Hamilton paid tribute to the unsung heroes that make up the mightiest (biggest?) Formula 1 team in the sport’s history.

Rewind eight years to when an underperforming Mercedes team , headed by Toto Wolff, Ross Brawn and Niki Lauda, audaciosuly plucked Lewis from McLaren, to the chagrin of Ron Dennis and the British media cabal, and went on to provide the driver with the best car and team of this era.

The rest is well-documented history that continues to be written by them, as it was at Imola on Sunday.

Apart from the seventh constructors’ title Mercedes scored their 58th one-two and 113th Grand Prix victory, their 104th since their return in 2010 and their 99th win of the hybrid era.

On the day, Lewis scored his 72nd victory for the German team; notably, all his 93 F1 wins were powered by Mercedes.

Admittedly overwhelmed, the F1 World Champion said in parc ferme after the race,  “I look at this team and think of everyone back at Brackley and Brixworth, they are the unsung heroes. They are the ones grafting away, never giving up, continuing to push, elevate and innovate.

“A big congratulations to the team on a hugely deserved Constructors’ title. I’m forever grateful to everyone and so, so proud to be a part of it. To come back year on year and deliver such great performance is absolutely unbelievable. 7-time champions – that’s something I’m going to be able to tell my grandchildren one day.

“No team has ever achieved this and I feel honoured to be a part of breaking this record. A big, big thank you to the entire Mercedes family, to Petronas and all of our partners, because we wouldn’t be able to do what we do without them.

“The race itself was an exhausting one, particularly with the speeds that we are experiencing around this track. I had a tricky start but extended the stint and managed to fight back to the front. It feels fantastic to clinch the title today at Imola in style with a one-two,” added Lewis.

With four rounds remaining in the title race, the Englishman leads teammate Valtteri Bottas by 85 points and could well wrap up his record-equalling seventh F1 drivers’ championship next time out at the Turkish Grand Prix two weeks from now.