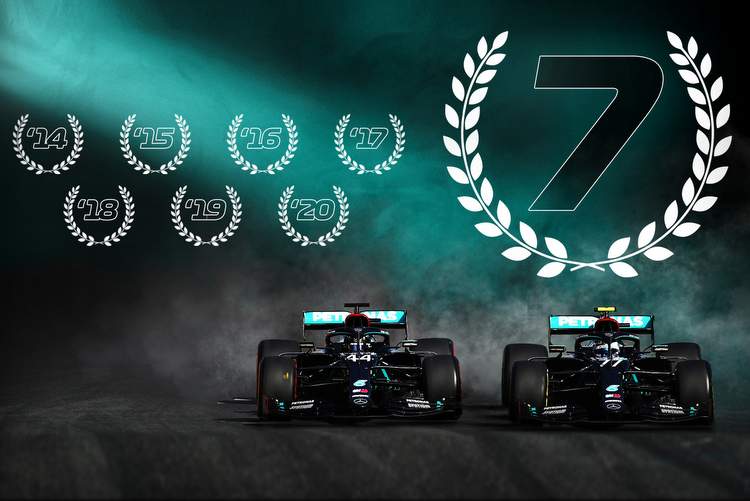 They accomplished the feat with four races to spare at the Emiglia Romagna Grand Prix at Autodromo Internazionale Enzo e Dino Ferrari aka Imola circuit, a home grand prix for the great Italian team.

Even if the record stands the test of time, others can still claim greater dominance over the course of a single season.

McLaren, with Brazilian Ayrton Senna and French rival Alain Prost, won 15 of 16 races in 1988 and ended up with a points tally (199) more than three times that of their nearest rivals Ferrari (65).

They also started all but one race on pole position. This season has 17 races, with Imola the 13th round.

So far Mercedes have been on pole every weekend but the champions have been beaten twice — at Silverstone and Monza by Max Verstappen and Pierre Gasly respectively for Red Bull and AlphaTauri.

In 2002, Michael Schumacher’s Ferrari team won 15 of 17 races with nine one-two finishes — the latter tally bettered by McLaren in 1988.

Mercedes are currently on 11 wins and five one-twos for 2020 so can only equal Ferrari’s 2002 achievement.

They will, however, become the first team to win seven successive championship doubles, with Lewis Hamilton poised for his seventh drivers’ crown and teammate Valtteri Bottas his only remaining rival.

MAKING @F1 #HIS7ORY! ❤️ WE ARE CHAMPIONS OF THE WORLD FOR A SEVENTH TIME!! 👊 pic.twitter.com/FqAHS6yYza

“Seven-times champs, that’s something I’m going to be able to tell my grandchildren one day,” said the Briton after his race win on Sunday.

The constructors’ title dates back to 1958 and Ferrari are the kings of longevity, having competed every year since the drivers’ world championship started in 1950.

Mercedes competed in 1954 and 1955 but then withdrew as a constructor until taking over champions Brawn GP and returning in 2010. They are fourth equal, with Lotus, in terms of total constructors’ titles compared to Ferrari’s 16.

Mercedes took all but one pole position in 2014, 2015 and 2016 but no team has yet gone an entire season dominant on Saturdays.

In 2013, Red Bull’s Sebastian Vettel won a record-equalling nine races in a row on his way to his fourth title in the last season before the start of the V6 turbo hybrid era that Mercedes went on to dominate.

On Sunday, apart from the seventh constructors’ title Mercedes scored their 58th one-two and 113th Grand Prix victory, their 104th since their return in 2010 and their 99th win of the hybrid era.

Team principal Toto Wolff deserves to take a bow for transforming an also-ran F1 team, putting together Ross Brawn (initially) and Niki Lauda to set the foundation for the team which then evolved by attracting the best brains in the business, and with Lewis Hamilton in the cockpit, they have rewritten just about every F1 record.