Bottas: I’m really proud to be a part of this team 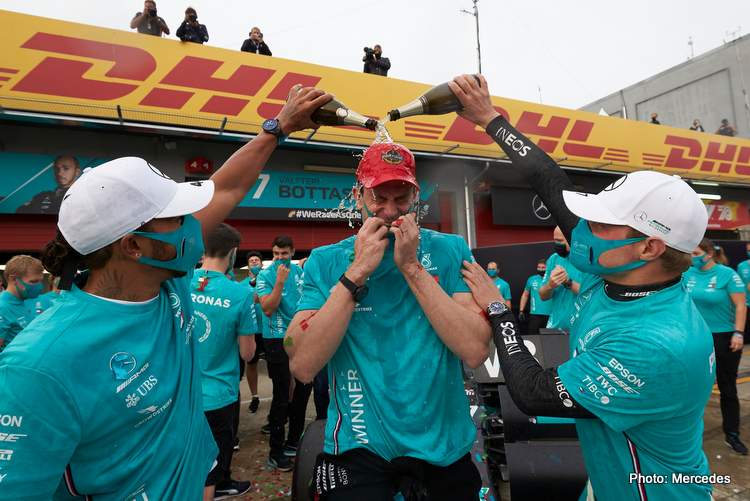 While their drivers finished one-two in the 2020 Emiglia Romagna Grand Prix, the day belonged to the mighty Mercedes team that have provided them with the benchmark equipment to do the job.

Speaking after he finished second to teammate Lewis Hamilton at Imola on Sunday, Valtteri Bottas said, “A massive congratulations to the team on winning the Constructors’ Championship! I’m really proud to be a part of this team and thankful for everyone’s hard work and dedication.

“It’s well deserved and I’m really happy for everyone at the track, Brackley, Brixworth and Stuttgart. This team keeps pushing and raising the bar and it’s inspiring to work with such a dedicated and driven group,” added the Finn.

On the day, Valtteri started from pole but early damage caused by debris compromised his race and could never really match Lewis’ pace,

“Obviously, it was a tough race for me today. The start was really good but then on lap two, out of Turn 7, there was some debris on the track. I didn’t have time to avoid it, so I aimed for the middle of the car, trying not to run over the debris with the tyres.

“But it caused some damage and got stuck on the car somehow, which made the car really tricky to drive and also cost a chunk of performance. I was trying as hard as I could to keep Max behind me and had to push over my limits, which led to some mistakes.

“It was a bit of an unlucky day for me after such a promising start, but it’s still good to pick up another podium and play my part in the Constructors’ title win.”

The result on Sunday means Valtteri now trails Lewis by 85 points in the drivers’ title race, which means it is pretty much game over for the Finn with only four rounds remaining in the championship.

Unlucky race for me to collect debris on lap 2 of the race with a loss of downforce, made it impossible to fight for the win today.#VB77 #F1 #Imola@MercedesAMGF1
📷 @SebastianKawka pic.twitter.com/B79Wg61qse