Verstappen: A big well done to the mechanics 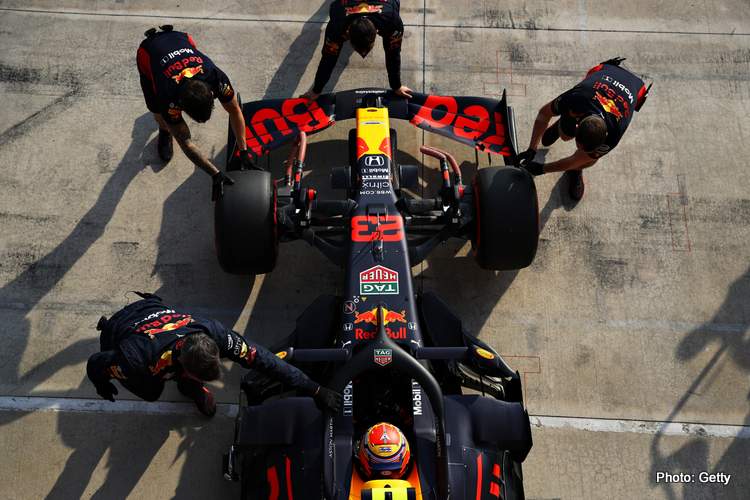 Max Verstappen may not have the fastest Power Unit strapped to the back of his Red Bull, but he has one almighty crew that has his back as they did during qualifying for the 2020 Emiglia Romana Grand Prix.

A technical issue during Q2 almost sidelined their ace driver Max Verstappen, only for some quick thinking and impressive work by mechanics and engineers did the Dutchman get out in time to move through to Q3, quite a feat in itself by the driver.

Once in Q3 he was able to qualify third and again promises to be a thorn in the side of Mercedes who are hot favourites for a one-two in the race tomorrow, but Max has a tendency to spoil those well-laid plans. and, no doubt, he will again be trying to do so at Imola on Sunday.

He said after the session, “It was a bit of a messy qualifying in the end and the issue we had in Q2 took the rhythm out of the session. Normally throughout qualifying you know exactly where you still have time to gain and you can build up but I never really got into that because I had to nail one lap on the mediums in Q2.

“Then after that, going into the first bit of Q3, still not having a perfect reference on the soft tyres made it all a bit more tricky. I think P3 was the maximum we could have done anyway and I didn’t expect to beat Mercedes but I would have liked to have been a bit closer, which I think was possible if we had a cleaner qualifying.

“After the session I said a big well done to the mechanics because it was impressive again to get my car back out in Q2. They always try their best even if it looks impossible and we should be very proud of that.

“The track is really cool and it’s enjoyable to drive. I initially thought it was going to be too narrow for these cars but it’s fine so let’s hope we can have a good race tomorrow,” added Max.

Christian Horner also tipped his hat to the crew in his team report, “Third on the grid for Max today was thanks to some incredible teamwork by the mechanics who managed to repair the electrical issue on car 33 in record time.

“Max was able to get back out on track in time to post a lap in Q2 but of course this had an effect on his preparation for Q3.

“Third was probably still the optimum today and qualifying on the medium compound gives us options for tomorrow’s race,” explained Horner.

Alex Albon, in the sister Red Bull, will start from sixth on the grid, the Thai driver four-tenths of a second slower than his teammate.

They’ve done it again! 👏 The lads beat the clock with another rapid repair job to get @Max33Verstappen through #Quali! 💪 #ImolaGP 🇮🇹 #ChargeOn pic.twitter.com/layClSJztl