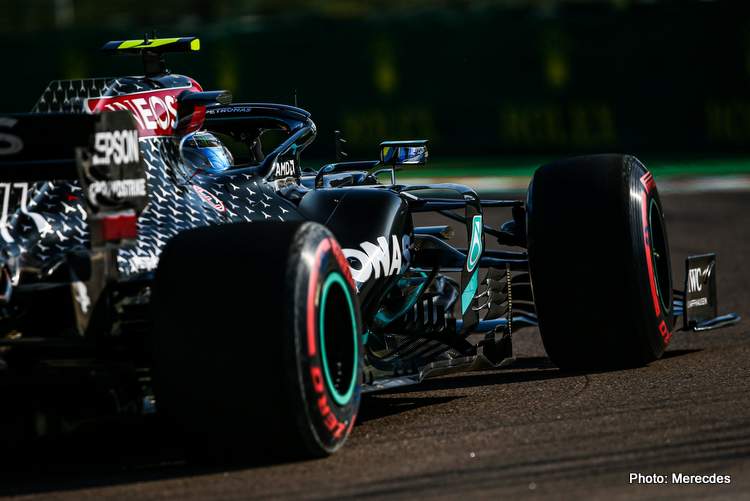 Valtteri Bottas topped qualifying for the 2020 Emiglia-Romagna Grand Prix in another session dominated by Mercedes, the Finn claiming his 15th top spot start at Imola on Saturday.

Throughout the session here was little to separate the two black cars on the timing screens, with Bottas enjoying a slight advantage before making it count with his final run.

Valtteri’s best came on this last flyer, with Hamilton going a tenth up on his final shot to top the timing screens briefly, until the #77 spoiled the party with his own mega-lap of 1:13.609, a tenth better than his World Champion teammate.

It was a great effort by the driver who too often plays second fiddle in the team.

Valtteri said afterwards, “You always have to [fight for it]. They are never easy pole positions. Really enjoyed it. This track when you push flat out is beautiful. I knew I had to improve in the last lap and found those small gains that were needed.

“It’s a great feeling when you get those. Turn 2-3 that was something I was really working on and only got there at the end, and the last couple of corners as well.”

“It’s going to be a good fight. It’s one of the longest runs in the calendar into Turn One. No doubt Lewis and Max will be chasing me, but it’s a good place to start,” added Valtteri.

Hamilton was dignified after a rare defeat, “Bottas did a great job and that was a pretty piss poor lap from myself and you can’t always get things perfect. I am grateful to be here and to have the performance that we have, and it is a real challenge out there and I enjoyed it.

“We will probably see a boring race as there is no real single place to overtake – the DRS will do some overtakes at Turn 1. I will give it everything I have got tomorrow. They don’t build tracks like this anymore, it is a classic and has got the history,” concluded Lewis.

The anticipated challenge from Max Verstappen never really materialised as he was seven-tenths shy of the top time, but the Red Bull driver was fastest of the rest with AlphaTauri’s Pierre Gasly again impressing with fourth place.

It was a frantic session for the Bulls, Max encountering problems during the session which was solved by his crew. It was touch and go but the Dutchman, as always, rewarded them handsomely but the Honda is no match for the Merc.

“It wasn’t a great qualifying because of the issue,” Max reported afterwards. “We didn’t have a lot of laps. It was a bit tricky. The mediums got through, we seemed to be struggling a bit, not a lot of grip. The second run was a bit better.

“P3 is not bad but personally, I wanted to be a little but closer. The track is really cool, really enjoyable to drive. I thought it might be too narrow for these cars but hoping we’ll have a good race here tomorrow,” added Max.

Alex Albon was sixth fastest, four-tenths down on his teammate, and beaten by Pierre Gasly in the ‘junior car’ as the Frenchman’s superb vein of form continued at Imola. Teammate Daniil Kvyat was eighth, a couple of tenths shy of the #10 driver.

While they may lack outright firepower compared to Mercedes, four Honda-powered cars in the top eight is an impressive feat, suggesting the power-stakes pecking order is shifting.

Renault’s Daniel Ricciardo was massively impressive, yet again delivering a high-end lap to claim fifth place – easily better than any other Renault powered drivers in the session. Teammate Esteban Ocon will start the race from 12th.

On home soil, and only a stone’s throw from Maranello, made no difference to the ailing Ferrari camp, Charles Leclerc was again better of the two Reds, but only good for seventh – his best effort a full second down on the top time.

It was again (!) worse for Sebastian Vettel who was condemned to a Q2 exit, nearly half a second slower than Charles, and out-qualified by George Russell. The young Englishman impressing mightily and thus the pair will share row seven on Sunday, with the Williams driver lining up 13th and Seb’s Ferrari in 14th.

The stage is set for an intriguing race tomorrow, at a challenging track that separates the men from the boys; fans can expect a race of high attrition (there will be incidents) where the cream should rise to the top come Sunday afternoon.

But the harsh reality is that only two drivers are likely to win tomorrow, the rest are there to pick up the pieces.

Thus Mercedes should bag yet another one-two, if they don’t it will be their loss but whatever the case they will be crowned F1 constructors’ champions tomorrow unless, of course, neither finish… 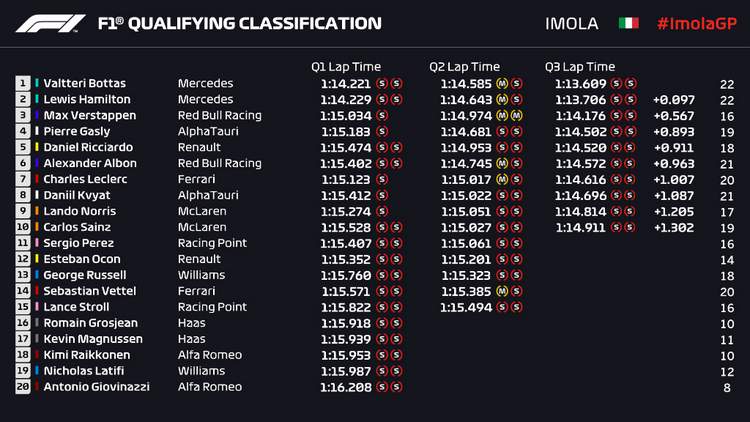