Bottas: It’s going to be a good fight. Game on! 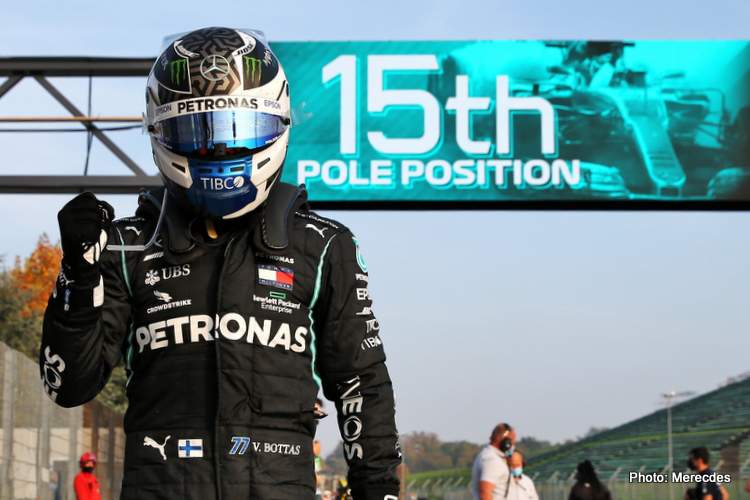 Valtteri Bottas claimed his 15th top spot start in Formula 1 when he topped the timing screens at the end of qualifying for the 2020 Emiglia Romana Grand Prix, the Mercedes driver a tenth of a second faster better than quali-maestro Lewis Hamilton.

There is no denying that Valtteri is blisteringly quick, the only problem is he is measured up against the best driver of this generation. So when he does beat the, soon to be, seven-time F1 world champion it is a memorable occasion.

After qualifying at Imola, Valtteri reported, “It’s never easy to get pole position but I’m really enjoying this track. When you push flat out, it’s a beautiful feeling and I knew I had to dig deep on the final lap.

Onboard with @ValtteriBottas on the 15th pole lap of his career. 🚀

Rate the Finn’s performance out of 77! 🙏💙pic.twitter.com/L5QesAB91t

“For me, Turns 2 and 3 were something I really had to work on today, and I only got there right at the end; the same at the final corners, where I’d struggled with some instability but I knew I really had to push at the end, so I risked it and the car just turned in nicely.

“I was able to find the small gains I needed and it’s a great feeling when you manage that – I definitely had the shakes after that one!

“Tomorrow, it’s going to be a good fight: it’s one of the longest runs of the calendar into Turn 1, so no doubt Lewis and Max will be chasing me. But it’s a good place to start and hopefully the pace is good. Game on!” declared the Finn.

Pole -position record holder Hamilton was impressed with his teammate’s effort on the day, and pointed out, “He does his talking on the track and that’s the great thing about Valtteri. I don’t think there are many people that can do what he’s doing if I’m really honest. I’ve got a huge amount of respect for him.”